Today, the Toronto-based media and investment advisory company, Corporate Knights released its 2014 Global 100 Most Sustainable Corporations in the World index, in which Coca-Cola Enterprises is ranked number 43.

This is the second time Coca-Cola Enterprises have been featured in the ranking, being listed #78 in 2011. CCE is number one among the five listed companies from the Food & Beverage sector, including Nestlé (#86), Unilever (#93), Campbell Soup (#96) and Danone (#97).

The index is based on twelve quantitative metrics ranging from a company’s revenue divided by its energy use to its lost-time injury rate. Only data that is publicly disclosed – in annual reports, corporate sustainability reports or through other channels – can be used in the Global 100.

“It is an honour for Coca-Cola Enterprises to be acknowledged as one of the most sustainable companies in the world. At CCE, our sustainability strategy is at the heart of everything we do and inclusion within the Global 100 is strong recognition that we are moving in the right direction” said Joe Franses, Corporate Responsibility and Sustainability Director at Coca-Cola Enterprises 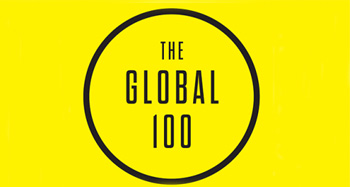