As Seen on The Guardian: University of Michigan's Mcity is Paving the Road for the Future of Transportation

Dr Huei Peng is a university administrator who keeps a packed schedule. His days are a jumble of meetings that often cross departments; his job also requires him to facilitate introductions between his team and outside interests, sit for media interviews, meet with government officials, and otherwise champion the University of Michigan’s Mobility Transformation Center (MTC), where he serves as director.

Above all else, it’s his leadership of that center that makes his job anything but typical. Roadways in the US are still a few years away from being filled with sensor-laden cars that drive their human occupants. Yet advanced automated car technology is here. We’re at the stage in which researchers are ensuring it can work smoothly and safely on busy roads. Places like MTC are closing the gap between today’s reality and a high-tech future.

As far as Peng is concerned, it’s a future that can’t come soon enough.

“We invest in connected and automated vehicle technologies because we see the tremendous potential to reduce traffic crashes, fatalities, injuries and congestion,” he says. “[Technology] can save thousands of lives and reduce injury, on the order of, say, 80% to 90%.”

That vision is being carried out, as there has been steady progress in vehicle automation and corresponding infrastructure this decade. The research firm Gartner forecasts that by 2020 there will be 250m vehicles on the road that will have some form of wireless network connection. In October, San Francisco-based startup Otto made the world’s first autonomous truck delivery and Panasonic announced it was teaming with the Colorado Department of Transportation to build a connected transportation system that shares data across vehicles and infrastructure.

To help push developments such as these, in 2015 the University of Michigan (U-M) opened Mcity, a 32-acre space that simulates the urban and suburban environment with its own network of roads, intersections, traffic signs, streetlights, sidewalks and obstacles. Mcity operates as a test site for connected and automated car technology.

It’s one thing to test autonomous cars on a long, open highway, but to really put the technology to the test, experts like Peng know it also needs to be tried in what resembles a real world setting. There, it can confront – and build up a repository of data about – the kinds of things that await it on public roadways.

Such testing at Mcity includes vehicles “talking” to each other and to connected infrastructure. MTC officials have also opted for realism in the design of the test environment, which means the inclusion of elements like faded lane markings and graffiti-dotted road signs – the kinds of imperfections the vehicles will encounter and have to make sense of in the real world.

“We’re collecting a lot of data to enhance our understanding of the connected vehicle environment,” Peng says. “We’re also working on deploying automated vehicles, including possibly driverless vehicles, on the streets of Ann Arbor, trying to understand how people interact with them, accept them, and how they adapt to them or how they hate them.”

Progress is a team effort

MTC is currently working on some 30 research projects in which about $6m is invested, according to Peng. So what have the center’s stakeholders learned so far? And what comes next?

Richard Wallace, director of transportation systems analysis at the Center for Automotive Research in Ann Arbor, believes Mcity has set a template for this type of testing. “We don’t want to expose the public to danger when something is only test-grade level,” he says about next-gen vehicles.

The center is also complementing vehicle testing at Mcity with research funded under the auspices of MTC. Those projects include the study of a cybersecurity roadmap for automated cars; fuel economy optimization of heavy-duty vehicles using connected vehicle technologies; and a look at consumer responses to automated vehicles.

U-M students are also contributing. Three driverless vehicle startups from the West Coast – Zendrive, PolySync and Civil Maps – have set up shop at the university. They work with Mcity’s TechLab, a learning incubator that pairs students with early-stage technology to help push innovations closer to market.

Another key piece of the puzzle: MTC’s partners span government, industry and the university itself. The hope is that by convening entities from the US Department of Transportation to carmakers like General Motors, as well as other major corporations, the university can tap a broad selection of ideas and expertise.

If everything stays on track, the coming years should continue to see the MTC at the center of a revolution in automobile technology that’s been unfolding in slow motion. Tech companies have given us a taste of what’s possible. Legacy carmakers are racing to perfect their own electric, connected and automated technologies. And now U-M is providing the optimal research environment where these new technologies can be refined.

“When traffic becomes a truly coordinated system instead of many greedy individual vehicles trying to make way for themselves, it will be a better system,” Peng says. “Safety, mobility, environmental impact, better access to jobs and moving people around to improve their quality of life … if we reach that, I think we can say we have been successful.” 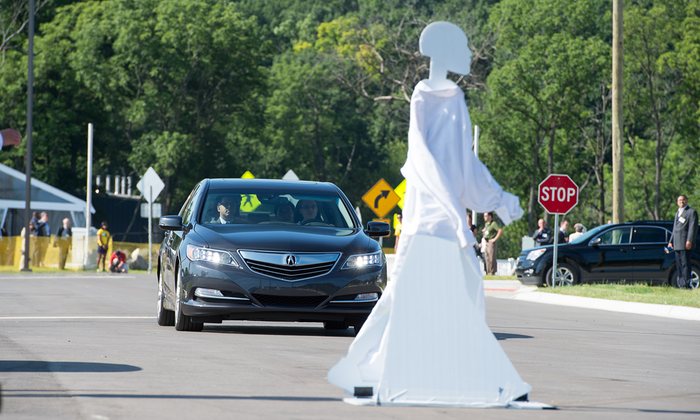