Banking on the Community: Why Barclays is Giving Space to Credit Unions

Apr 3, 2017 8:05 AM ET
Tweet This:
Banking on the #community: Why #Barclays is giving space to #CreditUnions http://bit.ly/2n93AaC @barclays_cship
Article

It may seem counter intuitive for a bank to give free office space, training and support to another finance provider. But that’s exactly what Barclays branches in Essex are doing – in a pioneering partnership with a not-for-profit credit union.

Under the scheme, high street branches across the county now host a weekly volunteer from the Essex Savers Credit Union, offering local people access to a range of financial services from emergency loans to ‘special occasion’ savings accounts.

“Barclays have been enormously helpful,” says Alison Davies, President of Essex Savers. “A number of the branches allow us to use space at the front of their banking hall and an office space to conduct business. Many allow us to put up a banner and have information leaflets available. In some branches, they even print our leaflets for us.”

Lisa Salmon, Barclays area manager for Grays, says the partnership – one of many such initiatives across the UK established as part of the Barclays Credit Union Programme – helps the bank to meet a local need. “There will always be a certain part of the community that needs emergency money to tide them over a difficult patch but who will not get access to a conventional overdraft or lending because of their credit score,” she explains.

“Parts of Essex have high unemployment, homelessness, people who have just arrived in the country or people on low incomes who just can’t get out of that cycle. Many of those people might well end up going down other avenues to access finance – and paying huge levels of interest.

“Now our personal bankers can say, ‘I don’t have any avenues left to help you, but I know who can. Let me make you an appointment’.”

Barclays began working with Essex Savers five years ago, after a meeting between Lisa – then Southend branch manager – and Alison. “She asked whether we could work together and I thought: ‘Why shouldn’t we give a credit union space in a branch? Who says you can’t do it?’,” says Lisa.

Essex Savers, which will be 13 years old this year, now has volunteers in five Barclays branches across Essex – Chelmsford, Braintree, Brentwood, Grays and Southend – as part of its portfolio of 25 face-to-face ‘service points’ in the county.

To date, Essex Savers has lent £9.5m in around 8,000 loans. Alison estimates that this service has saved local authorities at least £18.8m on rental arrears and repossessions alone – for example, in the ensuing court costs and housing costs of tenants losing their homes.

She is particularly proud of the money management help the union can now offer, which includes making sure the customer’s rent and council tax are paid before any remaining money is loaded onto a debit card.

“When the money comes in we can pay those priority bills to avoid the possibility of people getting into financial difficulty,” says Alison. “It gives people a safety net. We know it has helped people turn their lives around.”

“Credit unions have long had the title of the ‘poor man’s bank’ and we do see people who come to us because they need help to replace the washing machine or buy the kids some shoes,” says Alison.

“But we need to fight against that image because it leaves us with only people who are struggling. We are here to help those people the banks can’t help but we also need some of the more financially secure customers to put money in so that we can meet those demands. We have to balance out our membership because if we don’t have money coming in, we can’t service the lending for people in need.”

Barclays’ work in Essex is just one part of the bank’s wider package of support for the credit union sector.

The bank is currently seeking applications for the third year of its £1million Credit Union Programme – a four-year initiative in partnership with the anti-poverty charity Toynbee Hall which has so far helped 20 credit unions to innovate and grow. The scheme offers tailored support and training to 10 credit unions each year, helping them strengthen their governance and financial resilience.

Diane Eshleman, Global Head of Citizenship and Reputation, said the programme, launched in 2014, emerged from Barclays’ recognition that credit unions are a “vital part of the UK economy”. “Our ambition is to make sure that we are driving success not just for ourselves and for shareholders but for the communities in which we operate,” she said. “This credit union programme is an important element in making that happen.” 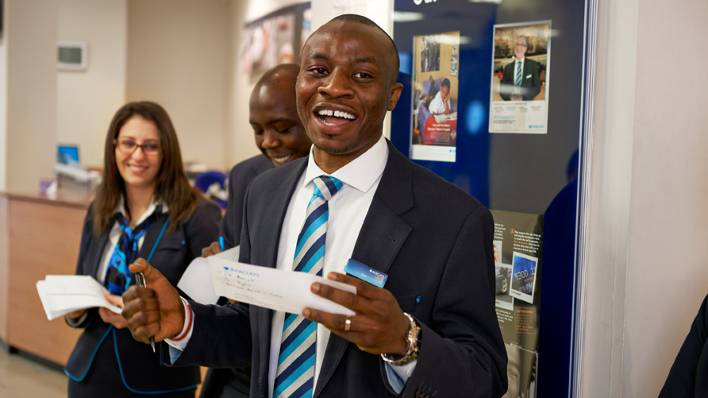