BNSF Railway Company (BNSF) released its first sustainability report based on the Global Reporting Initiative’s G4 guidelines in late 2014. This report addresses material issues important to BNSF stakeholders and its business. The first edition of BNSF’s GRI provides information on the contributions it is making today and what it is working to achieve in the future. It covers a range of topics including: stakeholder engagement; economic performance; network reliability and service issues; energy consumption; carbon emissions; land use and property management; emergency preparedness and response; employee recruiting; and philanthropy and community engagement. The information below covers the carbon emissions materials included in the report.

Improving air quality is a significant challenge across the U.S. as cities work to meet Clean Air Act requirements and improve quality of life for their citizens. Rail freight transportation can provide tremendous value in reducing the country’s overall transportation emissions and carbon footprint.

Rail continues to outperform trucks in producing lower emissions per ton mile of freight. As we work with our customers to take freight off the highway, we also significantly reduce carbon dioxide emissions and other pollutants to improve the health of the planet. BNSF also considers potential business risks associated with changes in carbon emission regulations. For example, changes in clean air laws or regulation of carbon dioxide emissions could reduce the demand for coal and revenues from the coal transportation services provided by BNSF Railway.

BNSF defines Scope 1 Direct Emissions as the emissions generated by BNSF’s own equipment and operations, which mainly consist of fuel combustion, and Scope 2 Indirect Energy Emissions as the emissions generated by other organizations supplying electricity that is purchased by BNSF. These definitions are in accordance with the World Resources Institute/World Business Council for Sustainable Development (WRI/WBCSD) GHG Protocol. Additionally, our GHG emissions inventory is developed in accordance with the WRI/WBCSD GHG Protocol.

Estimates of the BNSF GHG emissions were developed for carbon dioxide (CO2), methane (CH4), and nitrous oxide (N2O), three of the compounds for which the Kyoto Protocol established emissions reduction commitments. Mass emissions for each GHG are reported in
addition to the number of units of CO2equivalent (CO2e) emissions. Conversion to CO2e is done by multiplying the mass of emissions of a given GHG by its Global Warming Potential (GWP).

The GWPs from the Intergovernmental Panel on Climate Change (IPCC) Fourth Assessment Report (2007) have been used to develop the GHG inventory results. The GWP values used by BNSF are 25 for CH4 and 298 for N2O. In 2013, BNSF’s documented sources of greenhouse gas (GHG) emissions produced a combined total of 14,862,695 metric tons of Scope 1 and 2 CO2e emissions.

For the 5 percent of GHG emissions that are not produced by diesel powered locomotives, purchased electricity represents the single largest other source followed by vehicle fuel combustion then combustion of fuels to heat facilities. BNSF has performed corporate energy audits, third party evaluations at selected sites, and evaluates energy efficient options when replacing equipment to reduce GHG emissions. These initiatives have led to lighting retrofits, a compressor upgrade, and a hot aisle/cold aisle data center containment.

In 2013, BNSF operations produced 23,562 metric tons of Scope 3 business travel GHG emissions. BNSF defines Scope 3 Other Indirect Emissions as the emissions generated by other organizations that either supply goods and/or services to BNSF.

For more information about BNSF’s process for estimating GHG emissions, refer to the direct and indirect GHG emissions section.

Rail continues to outperform trucks in producing lower emissions per ton mile of freight. Since 2007, we have received more than $62 million in grants from a variety of state and federal programs for special low-emissions locomotives and idle reduction installations. These investments have primarily been made in Texas, California, Kansas and Nebraska to reduce air emissions and provide benefit to the environment and communities where BNSF operates.

In addition to environmental benefits, these projects also result in decreased fuel usage and saving costs for the company. BNSF has also pursued other opportunities to reduce our use of fossil fuel and related emissions. Renewable energy technology deployed by BNSF includes wind-powered
generators, solar-powered switches and a solar array. The company started these efforts as early as 1996. Wind turbines at more than 100 locations are used to augment the power system. At our 14-story office building in Topeka, Kansas, recycled energy generated by the
data center is used to heat the facility. An 800 kW solar array at our Stockton, California Intermodal facility provides approximately 70 percent of the energy used by the facility each year.

For information on how BNSF is reducing emissions and improving air quality please visit our
website: http://www.bnsf.com/communities/bnsf-and-the-environment/air-quality/

Visit our website to learn more about these initiatives: http://www.bnsf.com/communities/
bnsf-and-the-environment/green-technology/ 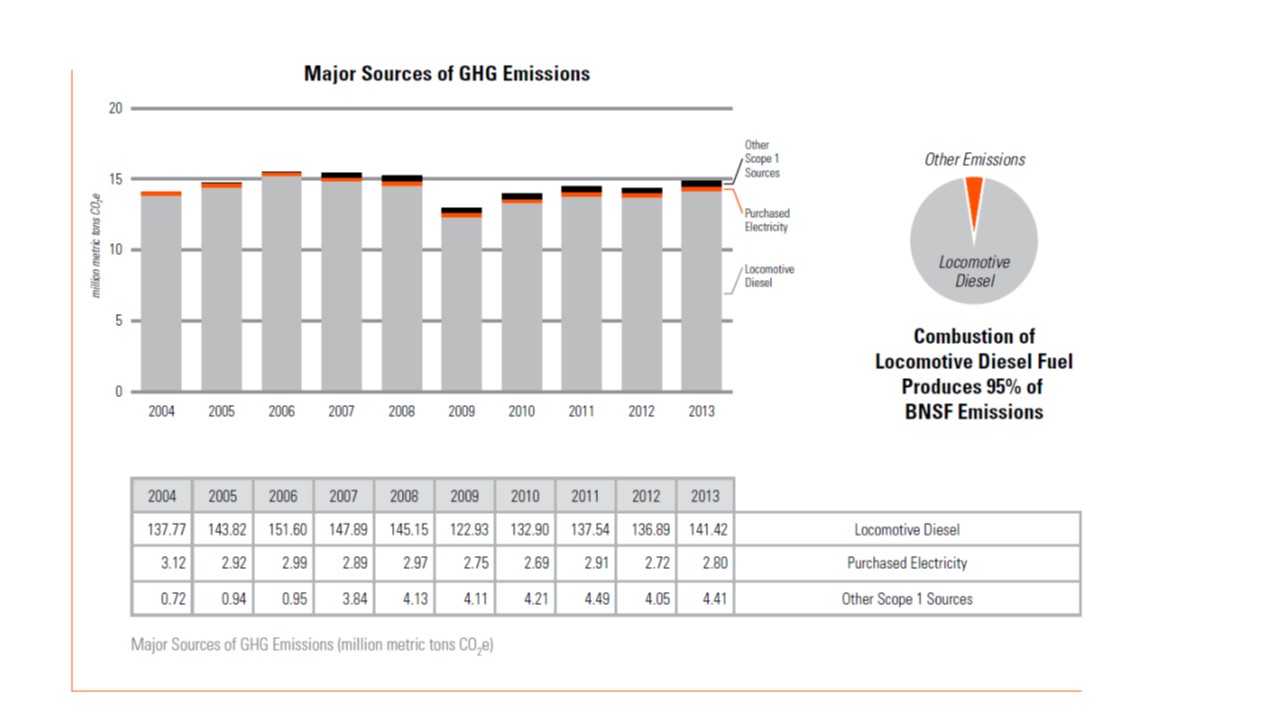 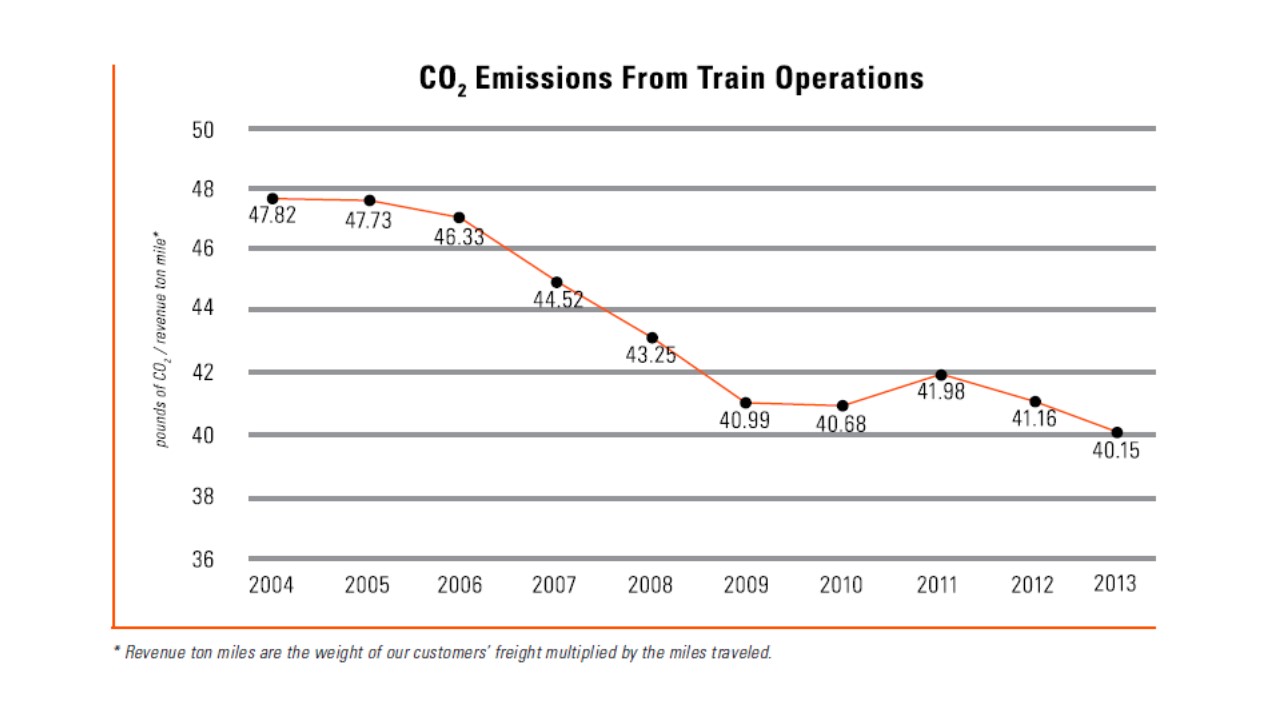 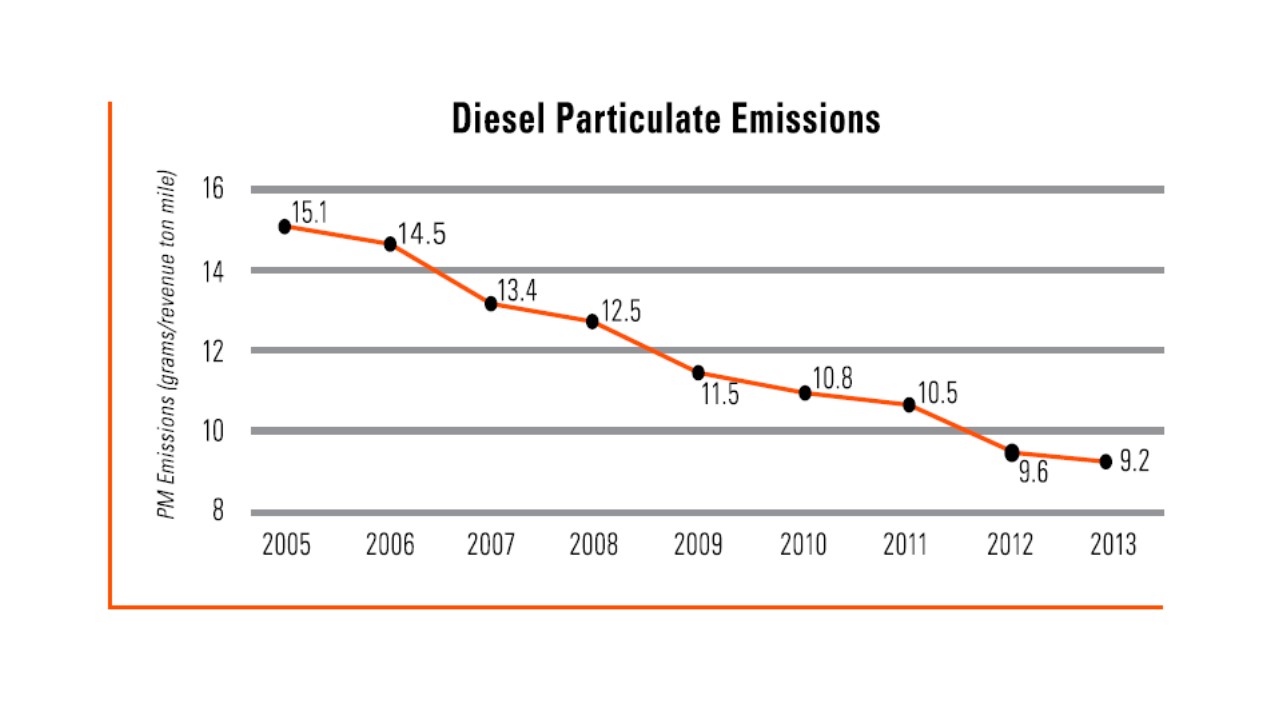