Cancer – Did You Know?: World Cancer Day Takes on Myths About Cancer

There is hardly a family that has not had a brush with cancer. We all know someone who has been fighting cancer, survived, or died from the disease. As a result, we tend look at cancer through our personal experience and often lose sight of the big picture. That is why today, on World Cancer Day, the Union for International Cancer Control, which is organizing it, is focusing on dispelling myths about the disease. Myths that cancer is just a health issue, for example. “Approximately 47 percent of cancer cases and 55 percent of cancer deaths occur in less developed regions of the world,” the UICC says. “By 2030, if current trends continue, cancer cases will increase by 81 percent in developing countries.”

GE is part of a global community that’s pushing back against cancer. Three years ago, GE launched healthymagination to increase the quality, access and affordability of healthcare. The fight against cancer has been a key focus of the campaign. In 2011, GE announced a pledge to accelerate cancer innovation, expand access to treatment, and improve the quality of care for 1 million cancer patients around the world by 2020. GE is also committed to invest $1 billion in the development of new oncology solutions over the same period. “Looking through the healthymagination lens has helped GE to focus and prioritize our investments and partnerships,” says Sue Siegel, healthymagination CEO. “It allowed us to really concentrate on ideas that count, ideas that can bend the curve.”

One example is the $100 million global Open Innovation Challenge to identify and bring to market ideas that advance breast cancer diagnostics. The challenge has generated more than 500 ideas from 40 countries and yielded five winners. One of them, Moffitt Cancer Center, conducts research on “modifier” genes and their role in predisposition to the spread of cancer. “They are looking into one of the most daunting aspects of cancer: metastasis,” Siegel says. “Metastasis is the most dreaded facet of breast cancer, even more so than the original tumor itself.”

Healthymagination has also helped promote breast cancer screening in Saudi Arabia. “GE deployed two mammovans and screened more than 2,500 women and counting,” Siegel says. “These efforts are breaking down access barriers and educating women and men alike on the importance of screening.” 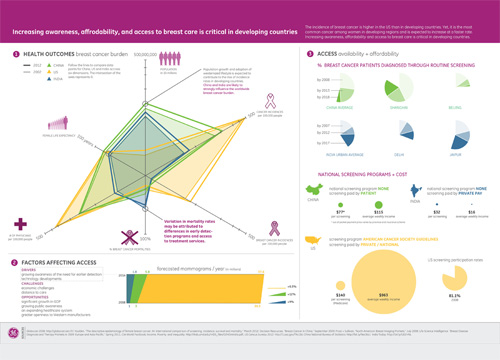