As part of its support for Special Olympics Great Britain, Coca-Cola Enterprises Ltd (CCE) partnered with Recoup to manage recycling at the charity’s ninth National Summer Games, helping to deliver a green Games with the collection of over 30,000 PET bottles.

Following on from CCE’s recycling efforts at the London 2012 Olympics and Paralympic Games, a number of initiatives were put into action across the Special Olympics National Summer Games, held at Bath University and Hengrove Park Leisure Centre in Bristol. A large number of branded CCE recycling crates were in place throughout the venues, as well as decontaminating facilities. A team of CCE and Recoup volunteers were also on-hand to assist with recycling and manage litter picking duties for the duration of the three day event.

All bottles disposed of at the Special Olympics National Summer Games were taken to Continuum Recycling, the joint venture facility between ECO Plastics and Coca-Cola Enterprises Ltd, to be reprocessed and turned into new bottles – hitting GB shop shelves in as little as six weeks.  This mirrored the process employed by CCE and its partners at Games venues for London 2012 and the Olympic Torch Relay last summer. The Special Olympics National Summer Games provided another valuable opportunity for CCE to spread the recycling message across Great Britain, inspiring people to recycle on the go and to embed that behaviour in the home.

Stuart Foster, Recoup’s CEO, said: “We were delighted to work with CCE again on such an important national sporting event, after the recycling success of London 2012. The collections at the latest Special Olympics National Summer Games made it one of the greenest on record, by ensuring that recycling of PET bottles and cans was as easy and accessible as possible for spectators and athletes enjoying the Games. ”

Simon Baldry, Managing Director of Coca-Cola Enterprises, said: “We are a proud supporter of the Special Olympics movement and were very pleased to be actively involved at this year’s National Summer Games with our recycling facilities and many on-site volunteers. We partnered with Recoup as part of our ‘Deliver for Today; Inspire for Tomorrow’ sustainability agenda. CCE has committed to reducing the carbon footprint of the drink in the consumer’s hand by a third by 2020, and initiatives such as this are an important part of the process as well as helping to encourage positive behaviour change. We want to spread the recycling message to inspire consumers to reassess their attitudes to waste, and the National Summer Games provided another valuable opportunity to do so. ” 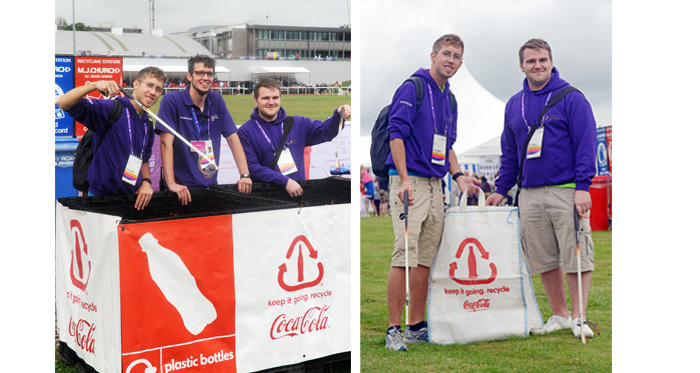