By Jonathan Foley,  Director of the Institute on the Environment at the University of Minnesota | 20 December 2013

There’s a powerful narrative being told about the world’s food system — in classrooms, boardrooms, foundations and the halls of government around the world. It’s everywhere. And it makes complete sense when you listen to it. The problem is, it’s mostly based on flawed assumptions.

You’ve probably heard it many times. While the exact phrasing varies, it usually goes something like this: The world’s population will grow to 9 billion by mid-century, putting substantial demands on the planet’s food supply. To meet these growing demands, we will need to grow almost twice as much food by 2050 as we do today. And that means we’ll need to use genetically modified crops and other advanced technologies to produce this additional food. It’s a race to feed the world, and we had better get started.

To be fair, there are grains of truth in each of these statements, but they are far from complete. And they give a distorted vision of the global food system, potentially leading to poor policy and investment choices.

To make better decisions, we need to examine where the narrative goes off the rails. 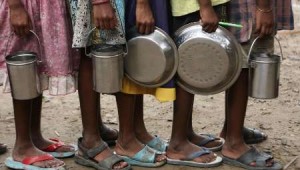