The rural health clinic in Kimalamisale, Tanzania, sits at the end of a rutted sandy road some 160 miles from the nearest large town of Kisarawe. Although the brightly colored concrete structure serves thousands of villagers living in the surrounding savannah, it has no electricity and its main healthcare equipment includes a stethoscope, weighing scales, and a blood pressure machine.

Things changed last spring, when a trained nurse arrived with Vscan, a pocket-size ultrasound machine manufactured by GE. Her visit was part of a research study designed to test technological innovations that will contribute to the Government efforts to accelerate attainment of Millennium Development Goals 4 and 5 in Africa. The study was developed by Tanzania’s Ifakara Health Institute in partnership with GE’s healthymagination campaign.

In Tanzania, hemorrhage, obstructed labor, sepsis and other pregnancy complications cause 454 maternal deaths per 100,000 live births. That’s more than three times above a U.N. Millennium Development Goal of 133 deaths by 2015.

Ifakara trained a total of 14 nurse midwives in ultrasound scanning. They fanned out across the Kisarawe district, population 230,000 of which 28 percent are women of reproductive age, to five rural clinics like the one in Kimalamisale, a health center, and a district hospital. “Newborn and maternal health is the most critical health issue in Africa, ahead of malaria or AIDS,” says Janeen Uzzell, Director of Healthcare Programs for healthymagination in Africa. “We want to show that GE is committed to the lives of mothers and babies in Africa.”

Similar studies had been done in rural Bangladesh and Indonesia, but Africa presented additional challenges. The rural clinics in Tanzania rely on solar panels for electricity, lack telephone service, and suffer from bad roads and no ambulances. But using a process called “reverse innovation,” the team was able to power Vscan by solar panels and let professionals use in the village after just 10 days of training. “In Africa, what the product actually enables is what matters the most,” says Uzzell.

The program used local doctors to train nurses who had not used ultrasound before. It includes rigorous quality control “to make sure that the nurses are doing what we want them to do,” says Kallol Mukherji, GE Program Manager in Tanzania.
Mukherji, who helped run similar projects in Asia, says that he was initially surprised when the women in Tanzania showed no emotional reaction to the images on the ultrasound screen. “They thought that we uploaded the picture beforehand,” he says. “They did not believe that you could actually see your baby before it’s born through a device.”

That may soon change. The Vscan is already helping healthcare professionals in Ethiopia, and Ghana recently signed an order to purchase 400 of the machines. Uzzell is now working with Nigeria’s Ministry of Health’s Saving One Million Lives initiative to reduce neonatal mortality in the country’s northern region. “We don’t just have a product,” Uzzell says. “We have a visualization tool that can help change maternal and newborn health in Africa.” 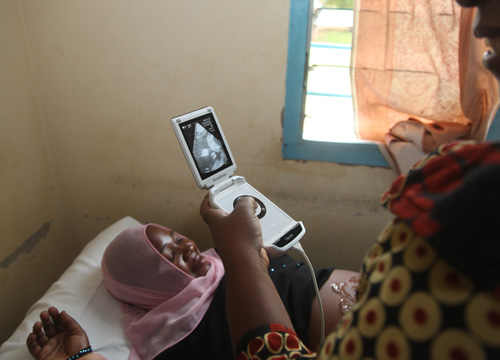