With its equity raisings, REIT structure and asset-backed securitisations, Hannon Armstrong is at the cutting edge of financing the transition to a low-carbon economy in the US. Its CEO Jeffrey Eckel tells Peter Cripps why mainstream investors are increasingly embracing its formula of sustainability and strong yields.

It has been a momentous couple of years for Hannon Armstrong Sustainable Infrastructure (HASI).

Since April 2013 when the Annapolis, Maryland-based investor raised $167 million through an IPO using a real estate investment trust (REIT) structure, it has returned to the market for an additional $74.8 million, issued a ‘green bond’ in the form of asset-backed securities, raising a further $100 million, and expanded a $700 million credit facility from Bank of America Merrill Lynch by a further $200 million.

HASI, which makes debt and equity investments primarily in renewables and energy efficiency assets, has also financed more than $950 million of transactions since its IPO, including loans to SunPower that has seen it enter the rapidly growing US residential solar market.

The company’s president and CEO Jeffrey Eckel says its IPO marked a turning point in its history by allowing it to step up its growth rate.

It is now expecting to issue another round of asset-backed securities, and raise more equity by the end of the year, as it eyes another milestone – $1 billion of assets on its balance sheet. And, crucially, it is on-track to meet its dividend target of $0.22, which equates to an annualised yield of 6.9% based on its 8 September stock price.

In some ways, it could be argued that HASI has benefited from being in the right place at the right time. After all, the search for yield is driving investors into the arms of high paying infrastructure projects, and yieldcos – vehicles set up to carry operating renewables assets including NRG Yield and SunEdison’s Terraform – are among the most talked about stocks on Wall Street at the moment.

Surely, HASI has benefited from the yieldco phenomenon? Its share price has risen some 15% since its IPO. But Eckel feels that HASI’s valuation lags behind that of some of the recently listed yieldcos.

“At the end of the day, investors should be evaluating these opportunities on the yield and dividend growth, and we feel HASI will be evaluated well with time,” he says.

Whether HASI can itself be described as a yieldco is debatable. As Eckel points out, it has extended debt to many yieldco-type assets such as renewables, although it also invests heavily in energy efficiency projects.

Eckel argues that in most cases its debt is senior to the equity, so perhaps HASI should be described as a “senior yieldco”.

However, he argues that HASI offers investors some significant advantages when compared with some yieldcos.

He adds: “We don’t charge management fees. Investors in HASI get 100% of the value of the platform and management team.”

While Eckel feels his company’s stock price could be higher, he admits to being pleased with its performance, and expects to continue to grow.

HASI is eyeing a $2 billion pipeline of projects. Its transactions are typically extending debt or equity to renewables or energy efficiency projects, mainly in the public sector but increasingly in the private sector.

And Eckel sees growing opportunities as the US comes to terms with the transition to a low-carbon economy.

“It’s a terrific time – the role of finance in accelerating adoption of cleaner technologies can’t be understated – you’re basically exchanging capital costs for operating costs (fuel),” he enthuses. “It’s a classic finance problem, and one in which we have an important role to play. Instead of paying a fuel bill every month, like a coal plant, it’s a debt service payment. You’re paying the capital and you don’t need to finance your operating costs.”

HASI is keen to take on this financing challenge, and is prepared to innovate. In fact, this spirit of innovation means that HASI is a unique company – in many ways a trailblazer.

It has moved from financing renewables projects into buying the land on which they sit. In May it bought a $107 million portfolio comprising land leased to solar and wind projects, and payments from land leases from wind projects.

And it is prepared to take on new opportunities as they arise. It has made two loans to SunPower, worth a combined $86.5 million to help finance its solar leasing programme, which means it is now in the residential rooftop sector.

“I don’t think we had any plans in our IPO to do residential solar, but we love our relationship with SunPower and we think they make the best panels and we think that makes for a great investment for us.”

Its IPO last year was innovative because it listed as a REIT, allowing it to enjoy tax breaks. It was given a ruling from the IRS to say it was allowed to be classed as a REIT.

Eckel argues that you could almost build a house from the energy efficiency assets HASI finances – walls, windows, heating, ventilation and cooling, so there is “no controversy” surrounding the decision.

Perhaps surprisingly, it is thought that no other energy efficiency firms have yet followed in HASI’s footsteps by applying for REIT status.

As he points out, issuing ABSs is not unusual for HASI – it has issued $3 billion to date. But he believes the recent issues were the first to have a carbon dioxide (CO2) metric attached – 0.61 metric tonnes of CO2 abated per $1,000 bond.

It has called the products Sustainable Yield Bonds, a description that it has trademarked.

Eckel admits that HASI is “wonkish” when it comes to devising a methodology for measuring the impact on greenhouse gases, but he believes the green bond market needs to up its game when it comes to reporting impacts.

“We believe it’s the first and perhaps only green bond to have a metric associated with it,” he says. “If carbon counts and capital is scarce, then we ought to continue investing in these technologies/projects that have the biggest bang for their buck in terms of greenhouse gas emissions.”

He adds: “Every bond should have such a metric – whether minus or plus. That way, investors get to choose. We think a third-party verifier that is willing to do the maths will be very valuable to investors. I think there’s a lack of analytical rigour in the rating of these bonds. An external verifier is what the market needs. It needs to be more analytical, there’s still a gap there.”

HASI’s green bonds have been structured as ABSs, but Eckel sees no impact on demand for these products in the wake of the financial crisis.

“Enough investors are comfortable with the technique,” he adds. “The bigger issue is getting enough supply, and that’s what we are trying to do.”

“Taking HASI public allowed us to add assets more quickly to our balance sheet and to issue ABSs since we have aggregated them. The key strategy is aggregating.”

Eckel is also encouraged by the macro environment after the US Environmental Protection Agency announced plans to reduce emissions from power plants and President Obama pledged to increase spending on energy efficiency in federal buildings, which Eckel said would provide futher opportunities for HASI.

Looking forward, Eckel says the company is on course to grow earnings and, by extension the dividend, by between 13% and 15% from the fourth quarter of 2013 to the fourth quarter of 2014. As it continues to cut deals, it needs to raise capital, so it is expected to return to the market with another Sustainable Yield Bond – this time publicly rated – and an equity raise, perhaps by the end of the year.

Which is good news for HASI, which believes there will be increasing call for sustainable infrastructure as the US transitions to a low-carbon economy.

“We think the growth is sustainable. We have a lot of carbon we are emitting around here and a big job ahead of us.” 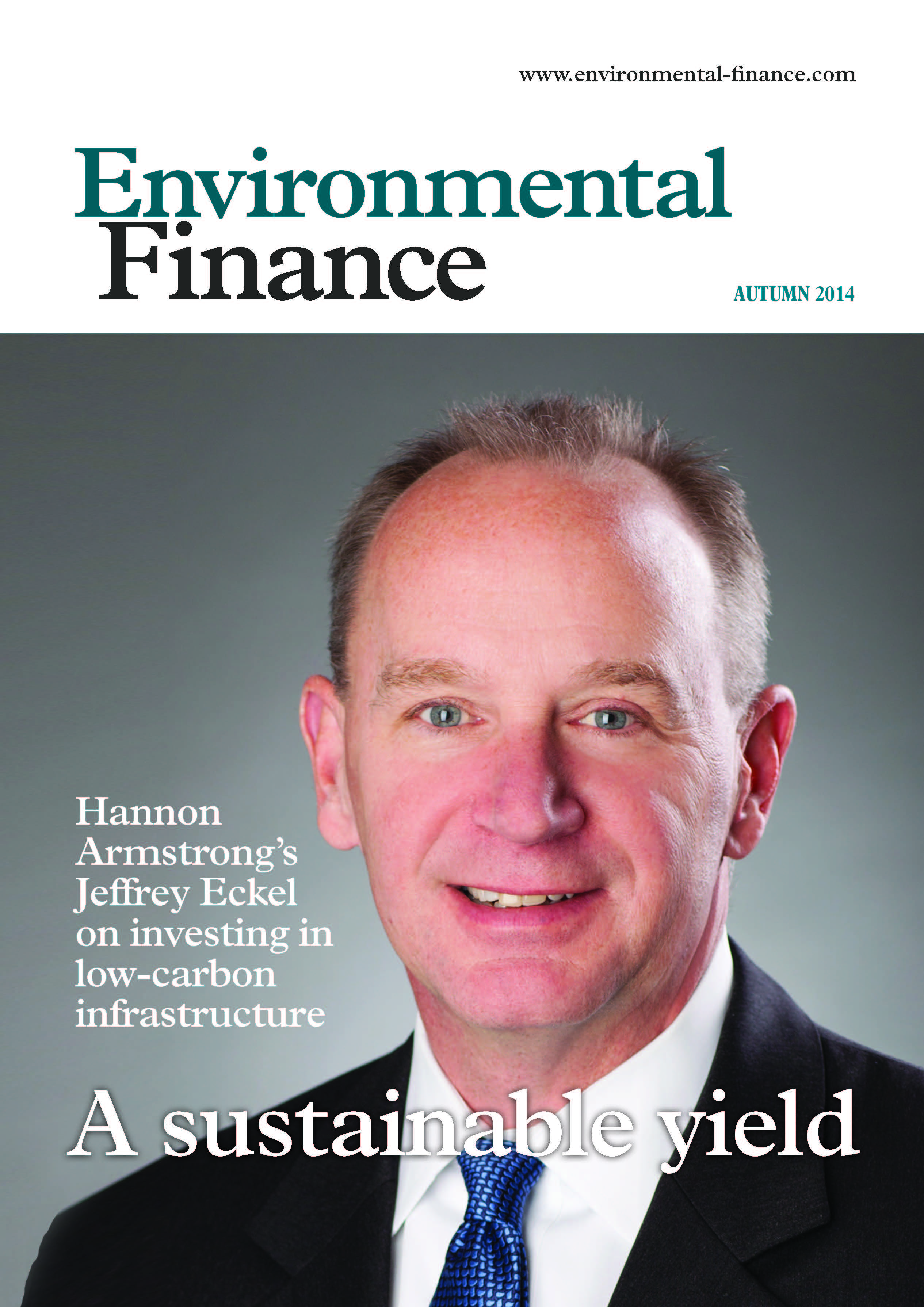