Shoe designer Lucy Choi and entrepreneur Bianca Miller–Cole were the guests of honour last week at an evening of inspiration hosted by the Barclays Win Gender network.

“It’s important to take risks in life,” says shoe designer Lucy Choi. “If you believe and feel passionate about what you’re doing, then go for it.”

Choi was talking to around 100 Barclays staff who crammed into her boutique in central London last week seeking inspiration, insider tips – and possibly a new pair of heels.

Hosted by the Barclays Win Gender network – which seeks to help the bank attract, develop and retain talented women – the event also featured an appearance by Bianca Miller-Cole, The Apprentice finalist who has launched a hosiery brand.

"The idea of evenings like this is to create a space for women to get together outside work, share ideas and be inspired by success stories." ~ Caroline Graham, Co-Chair of the Barclays Win network.

“The idea of evenings like this is to create a space for women to get together outside work, share ideas and be inspired by success stories,” says Caroline Graham, Co-Chair of the Win network, which was founded over 10 years ago and now has 5,000 members in London alone.

“Lucy and Bianca are incredible entrepreneurs who are extremely motivated and successful and it’s wonderful to see so many people here tonight to hear what they have to say.”

Adaora Okolie and Lucy Stockdale were among the network members who came to learn more about Choi and Miller’s successes.

Okolie, who works in Compliance, said she attends Win events to meet Barclays colleagues. “It’s good to find out about how people have progressed in their careers,” she said. “It’s an opportunity to meet people outside your team.”

“It’s helpful to hear from interesting women who aren’t in financial services,” agreed Stockdale, who works in Specialist Real Estate. “I’ve been to other events where they’ve had senior women within Barclays giving talks. It’s good to hear how they have dealt with challenges – not necessarily gender-related, but you do have that extra empathy for a woman.”

After mingling with guests, Choi and Miller shared their stories. Choi, who is the niece of couture shoe designer Jimmy Choo, told the audience how she sold her flat and used up her savings to set up on her own, after 15 years in the City and another 10 at the ballet flat brand French Sole.

“I set up the business in 2012 at the same time as having my first child, Thomas,” she said. “It was tough, but it was something I wanted to do. When I was in the City I used to have so many pairs of shoes under my desk. My colleagues used to laugh at me and joke, ‘One day you are going to open a shop’. And now here I am!”

Choi’s eclectic designs – inspired, she said, by “the two Kates – Moss and Middleton” - are now stocked at Fenwick, Harvey Nichols, Net-A-Porter and Matches Fashion, and in high-end departments stores and boutiques in Asia, the Middle East and Europe.

Setting the right tone
Miller-Cole, meanwhile, described herself as “born to be an entrepreneur”. “At six, I set up a shop in my bedroom. My only customers were my parents and I made an excellent profit because they provided all the resources,” she said, to laughter.

After a degree in business management and economics and a period in HR and recruitment, Miller set up her personal branding business, The Be Group, in 2012. Then came her 2014 appearance on The Apprentice, in which she reached the final and pitched her idea of nude tights “for every skin tone”.

“I didn’t win but after the show I had people coming up to me saying, ‘You’re the tights lady, where are my tights?!’,” she said. “I didn’t want to be somebody who would take risks with Lord Sugar’s money, but not my own.” So in 2015, she set up Bianca Miller London, now stocked in Topshop and department stores across London.

“I’d spent my adult life not being able to get the right shade of nude hosiery – it was black tights or no tights,” she said. “This was about creating a brand that was inclusive, that was about all women of all skin tones. It was a risk but I am enjoying the brand’s development and having fun finding out what customers want.” 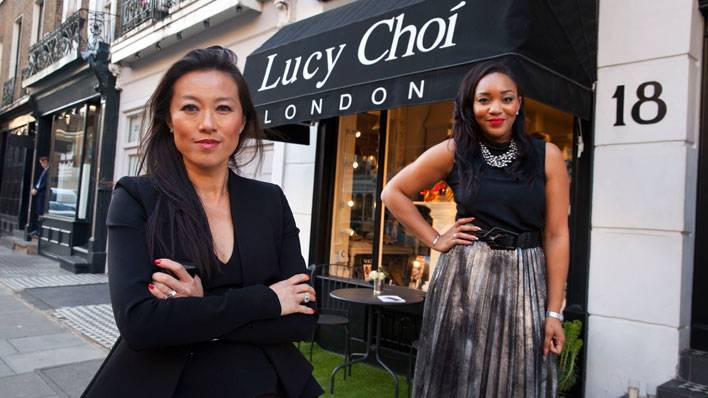