Hydropower is Making Waves as a Source of Renewable Energy

In northern Norway, the hydropower station Øvre Forsland “sits on a riverbed at the edge of a forest, with an exterior that aims to reflect the irregular shapes of the spruce trees forming its backdrop,” the Guardian reported last month. While the sleek design attracts tourists and complements the scenery, its purpose is much more remarkable.

The small building is capable of supplying power to 1,600 Norwegian homes. The system takes advantage of a 157-meter drop in the Forsland river and uses two Francis water turbines to convert the natural flow of water into electricity. A storage system helps meet surges in demand.

Øvre Forsland’s eye-catching design draws more attention to the benefits of hydropower, which has been used for decades. Today, hydropower accounts for 16.1% of the world’s electricity, produced by 150 countries.

Its three modes of production make a low impact on the environment: “run of river”, in which electricity is generated through the flow of a moving body of water; “reservoir”, whereby energy is generated by releasing stored water; and “pumped storage”, or recycling stored water by pumping it into a higher reservoir and releasing it to create a new water flow that generates electricity.

China is the largest hydropower producer, adding more capacity than any other nation. Africa, though currently a low-volume producer, has the greatest potential to increase output of hydroelectricity. In the US, hydropower makes up 7% of total electricity generated and continues to be the country’s largest source of renewable power.

Renewable energy projects like solar arrays and wind turbines get lots of press these days, but hydropower actually dates back 2,000 years, when ancient Greeks used water wheels to grind wheat. And modern hydropower applications far outdate other renewable energy sources. In 1880, a water turbine was attached to a generator to create an electric spark between two conductors and produce light. A year later, a generator connected to a water turbine at a flour mill powered up street lights in Niagara Falls, New York. A century later, in 1982, the world’s first hydroelectric power plant began operations by using the Fox River in Appleton, Wisconsin.

Hydropower is generally less expensive per kilowatt-hour (kWh) than wind or solar. Home Power magazine calls it the “best renewable bang for the buck”. It also offers the “rarest of attributes among renewables: a steady stream of power day and night”, according to Mother Earth News.

Still, the untapped potential of many dams and waterways means more electricity is waiting to be created. Leveraging dams in the US alone could produce 12,000 megawatts of energy.

Microhydropower sources, which deliver less than 100 kW of energy, can generate electricity in areas that are distant from industrial-sized hydro plants. Energy developers are tapping into into river systems, tidal basins and irrigation ditches. In Minneapolis, for example, a 9.2-megawatt hydroelectric dam was added to a fast-moving stretch of the Mississippi River, generating enough electricity to power 7,500 homes.

General Motors, meanwhile, is using microhydropower at its St Catharines powertrain plant. The facility uses canal water from the nearby St Lawrence Seaway and Niagara Escarpment to cool machines and lower building temperatures in the summer. Water is delivered through a penstock, similar to a large pipe, which runs parallel to the Welland Canal. The penstock moves water from a high elevation to a lower elevation, using the force of gravity to feed water to the plant. This cools the plant’s refrigerated water system, providing chilled water to maintain temperatures of process equipment.

Although hydropower generation can impact the environmental, several measures can be followed to reduce or avoid effects on fish, wildlife and other natural resources. Low-impact hydropower certification is a requirement in some places for renewable energy qualification. 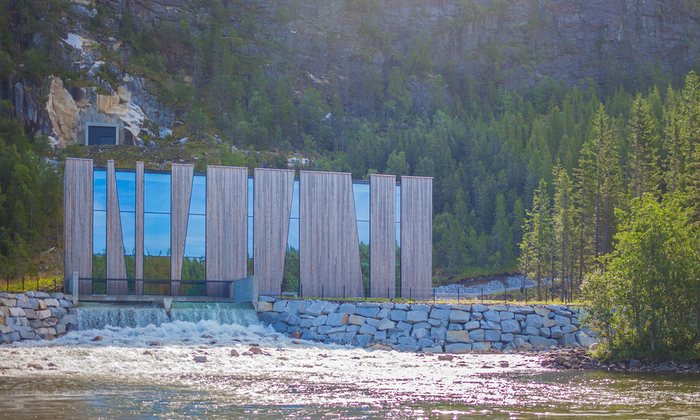