Massachusetts vs. New York and the Energy Storage Race

State governments are increasingly recognizing the strategic and tactical benefits of legislative initiatives regarding energy storage. As a strategy, incentivizing or mandating energy storage helps states achieve their greenhouse gas reduction goals. This is because increased energy storage capacity allows for increased renewable production capacity, as any over production can be used at a later time. By serving as a buffer between production and consumption, energy storage also helps alleviate concerns about the effects of a rapid rise in renewable energy exports to aging grids.

On the tactical level, the mere act of setting energy storage goals can grease the skids for deployment. New York City’s announcement of a storage goal of 100 megawatt-hours by 2020 was driven in large part by a need to get project developers off the fence, creating demand that would help streamline and accelerate the energy storage permitting process, according to Daniel Zarrilli, the city’s senior director of climate policy and programs.

Like any emerging industry, there have been concerns from commercial, industrial, and public-sector organizations about the timing and scope of energy storage deployment. While technologies such as lithium-ion battery-based energy storage are proven and the cost-saving benefits are well understood, customers and project developers are looking for clear direction from government on how it will support their energy storage investments with regulation, incentives, and other programs.

Winner may take most

It may seem that a rising tide in storage deployment would raise all boats. But when neighboring states, such as New York and Massachusetts, are both striving for the same pool of investors and jobs, the race can turn contentious. In the coming days, the Massachusetts Department of Energy Resources (DOER) will formally set a target for energy storage deployment by electric companies, as mandated by the state legislature last year. The DOER’s recent energy storage initiative study determined that deploying 1,766 megawatts of new energy storage across the state’s electric grid could result in an estimated ratepayer savings of $2.3 billion.

New York, meanwhile, has seen high profile investments in energy storage, both at the state and the city levels. A bill to establish an energy storage deployment program—including procurement targets for 2030—has passed the Assembly and the Senate and, as of this writing, is awaiting Governor Andrew Cuomo’s signature.

How the competition will play out is still unclear. What is evident is that the state perceived as the winner in this race will likely become a regional hub for energy storage, attracting investment and jobs, while leaving the other state in its shadow. This puts policy makers in the hot seat. Can Massachusetts nudge the DOER’s target high enough to convince a critical mass of energy storage employers to put down roots in the Commonwealth? Or will the abundance and extent of programs under New York’s Reforming the Energy Vision (REV) scheme hold more sway? GE, whose renewable energy arm manufactures a range of energy storage solutions, is relocating its headquarters from Fairfield Connecticut to Boston, Massachusetts and has promised to bring more than 800 jobs to Boston. On the other hand, Tesla and Panasonic have voted for New York, building a $900-million-dollar plant in Buffalo, to produce photovoltaic cells, which is expected to provide more than 1,500 jobs. All three companies are industry heavyweights, capable of swaying industry opinion. 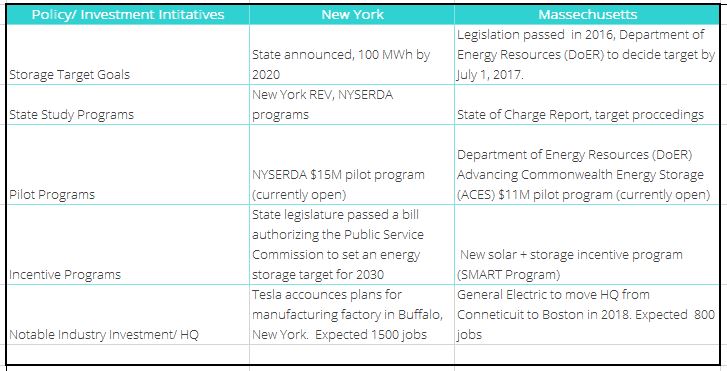