Jeneria and Yesalai, two warriors from Kenya's Samburu tribe, visited more than 800 students at Alta Vista Elementary School in Redondo Beach, California, on May 19 as part of the National Geographic Big Cats Initiative Sister School Program (BCISSP). The program pairs American schools with African schools to help educators teach their students about the worldwide decline of lion, tiger, cheetah, and leopard populations, a trend that Jeneria and Yesalai are working with National Geographic to reverse. Alta Vista Elementary has participated in BCISSP for three consecutive years, and the students raised more than $4,500 for their African sister school, Remot Primary, this year alone.

"We are thrilled that our school was chosen for this unique and meaningful opportunity," said Susan Wildes, principal of Alta Vista Elementary. "It allows our students to make connections with diverse groups of people and become more internationally minded, while engaging in a passionate study of the animals our school loves so much."

Alta Vista was one of the first schools to sign on to BCISSP when the program was launched during the 2013-2014 school year. The initiative educates students at American elementary schools about the dangers facing big cat species in Africa and encourages them to engage in service learning projects to learn more and raise awareness in their communities. Any funds raised during these projects go toward the purchase of school supplies for their sister schools in Africa, which are often in communities most affected by big cat extinction.

The visit from Jeneria and Yesalai gave the students the chance to hear directly from those who are working with National Geographic on the ground to halt big cats' population decline. They gave a presentation to a full auditorium about how they track and observe lions and teach villagers how to protect their livestock from attacks. Jeneria and Yesalai are two of the 19 total Samburu warriors in Nat Geo's Warrior Watch program, which enlists the help of the Kenyan tribesman in observing and protecting big cat species.

"Lions are really declining in number," Jeneria said during his presentation. "We have only 2,000 lions left in Kenya, and in the whole African continent, there are only 15,000 left."

Wildes spoke with the Daily Breeze about the program, saying big cats are included in nearly every subject at Alta Vista. She said the $4,500 the students raised for Remot Primary this year will go toward renovating the school, as well as repairing and restocking the Remot's termite-infested library. The students are in regular contact with their counterparts at Remot, sending emails, photos and letters, and holding virtual assemblies. Wildes says she can tell how passionate her students are about this cause.

"They're really understanding what their role can be in raising money and raising awareness," Wildes said. 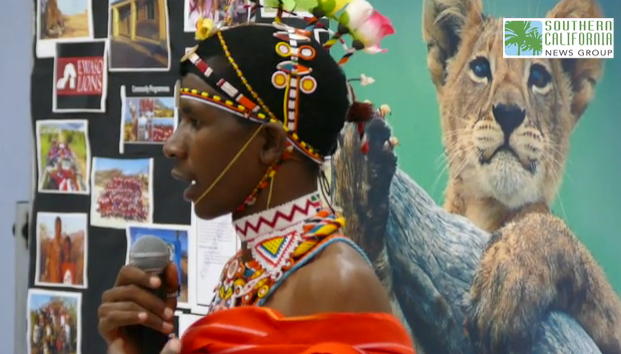