For Safeway Vice President of Transportation Tom Nartker, embedding sustainability into the company’s operations is more than a job. It’s a personal mission.

Tom is responsible for setting and meeting fuel-efficiency goals for Safeway’s fleet of trucks and ensuring that employees at our distribution centers understand how and why the company implements the efficiency strategies it does. Although Tom is proud of many initiatives from his more than 20 years at Safeway, a recent highlight for him was surpassing the Ton Miles Per Gallon (TMPG) target he set for the company.

His goal was to improve Safeway’s TMPG average by 25% by 2012 versus a 2006 baseline. In 2012, we surpassed it, and we made even more progress in 2013, realizing a 27.4% improvement over our 2006 baseline. The improvement was so significant that it has both reduced our total 2013 greenhouse gas emissions and saved Safeway $14 million in transportation costs to date.

Others took notice as well. In fact, in February 2014, President Obama chose our distribution center in Maryland as a backdrop to announce an executive action directing the EPA to tighten regulations on carbon emissions from trucks.

“The president’s visit was validation that we’re doing the right thing,” Tom says. “We’re taking a leadership role, not just in our own fleet with being a SmartWay partner but by requiring our third-party carriers to be SmartWay carriers as well. The EPA says it has been the biggest increase in participation that it’s ever had.”

Read more about Safeway’s efforts to reduce its energy and carbon footprint, and other Planet initiatives. Join the Facebook and Twitter conversation by using the #HeartOfSafeway hashtag. 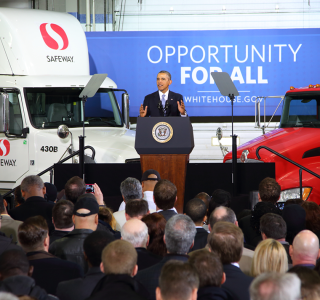 Albertsons and Safeway in Colorado Helped the Salvation Army Give 3,000 Boxes of Food to Those in Need
May 22, 2020 5:30 AM ET
Puyallup Food Bank Moves to New Larger Location Thanks to Safeway
May 13, 2020 10:00 AM ET
Safeway Delivers Thousands of Tulips for Nurse Appreciation Week Amid COVID-19
May 8, 2020 12:15 PM ET
Albertsons Boosts Care for Its Communities, Associates and Customers as Sales Surge
May 6, 2020 12:30 PM ET
Grocery Stores Are Portioning out Flour From Industrial-Sized Bags to Deal With Increasing Demand
Apr 28, 2020 4:45 PM ET