Topcoder, Booz Allen and Red Hat bring the Best Coders in the World to D.C. for the ‘Super Bowl’ of Crowdsourcing Competitions

Crowdsourcing competitions of this scale bring attention to some of the world’s most pressing problems while effectively and efficiently providing tangible solutions for exacting change. A couple of the solutions generated by the TCO competitors, include:  a data visualization platform for train dispatchers to enable real-time traffic analysis and risk detection, and a map of flight paths and no fly zones usable by drones

At the closing day, Booz Allen and Topcoder convened leaders to share best practices and challenges in building enterprise-scale crowdsourcing organizations, including blending the key insights of government and industry. Speakers included:

The event brought the eyes of the innovation and crowdsourcing world to D.C. to test the boundaries of what is possible in the federal sector, and  builds on another successful partnership between Booz Allen and Topcoder.

The winners of the #TCO16 finals were:

The winners of the EPA megahack challenge were:

Since 2013, Booz Allen and Topcoder have combined to run several crowdsourcing challenges. To learn more, visit the TCO website. 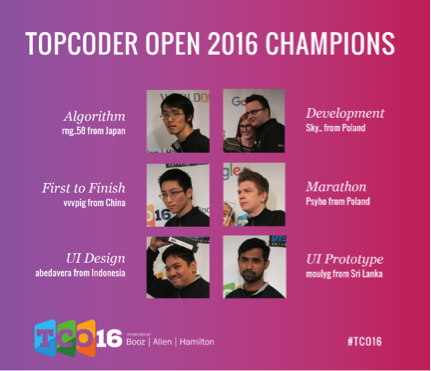