Danny Raymond says his love for fishing and the outdoors started in the womb. He’s sure he was born with a rod and reel in his hand. Raymond, a log truck driver for Weyerhaeuser’s Western Timberlands business, and his wife Karen, who provides administrative support at the Eugene, Ore., office, share a passion for advocating and educating their community on the conservation of fishery resources.

“Absolutely,” Danny says. “The more people understand, the better the choices they make. This is an exciting time for us to be advocates.” The Raymonds were recent recipients of Weyerhaeuser’s companywide “Volunteer of the Quarter” award.

Even before they married in 2004, the Raymonds knew many local salmon and steelhead runs were at risk. They’d seen streams decline in quality and carrying capacity and wondered what they could do about it.

In 2007, they joined an Oregon chapter of the Coastal Conservation Association. CCA is the nation’s largest marine-resource conservation group, with more than 30 years of fisheries-management experience and more than 90,000 members. Soon they were devoting most of their spare time to the organization. For the past three years, Danny has been Eugene’s chapter president and fundraising chairman. He’s also on CCA’s state board.

Salmon and steelhead spend one to five years in the ocean before returning to the streams where they hatched. They then spawn and die, and in doing so provide nutrients to the interior ecosystems. On rivers and streams where incoming fish are removed from the system — through sport or hatchery capture — the waters are deprived of these bodies and their important nutrients. Eventually, the system’s ability to feed invertebrates and young fish is diminished.

The Eugene CCA chapter’s standout event is the “No Carcass Left Behind” fish toss that takes place four times a year in streams around the area. Members recruit volunteers from Weyerhaeuser, local schools and surrounding communities. Teams transport spawned-out fish carcasses from state hatcheries to nearby creeks, where they’re tossed into the water. The practice contributes to the growth of tiny invertebrates that feed the young fish that repopulate the streams and promote a healthy environment. “It’s definitely a hands-on activity, a little smelly and slimy,” Karen says, “but it’s a whole lot of fun to chuck the fish.”

Since 2007, they estimate they’ve “distributed” nearly 100,000 pounds of salmon carcasses into local creeks. The waters are regaining their health. A newspaper article recently reported that Fish & Wildlife agents witnessed salmon spawning in an area where they haven’t spawned in countless years.

When the Raymonds aren’t chucking salmon, they’re taking kids on fishing trips and campouts for Big Brothers Big Sisters. Danny takes part in a Mackenzie River float trip that’s intended to transition veterans back into the community. They’re active in their church, too. Right now, Karen is involved in a confirmation program for middle-school kids. She’s also been involved with a sewing group that provides quilts to men and women in the military.

“Because of their passion, values and commitment to be environmental stewards for their community, the Raymonds are our Volunteers of the Quarter,” says Ann Leyva, program manager for the Weyerhaeuser Giving Fund. “The selection committee chose the Raymonds for the honor because of the uniqueness of their work, their creativity, and that they continue to have a significant impact on their community, the wildlife, and the waters, and set a wonderful example for others.” 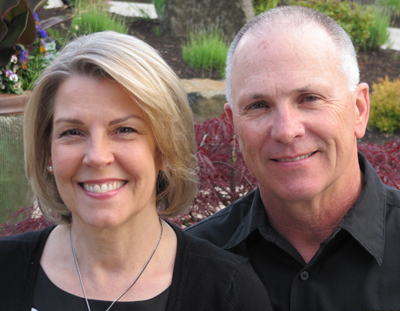