Caesars Entertainment Corporation recently published its 2012 CSR and Sustainability Report. This is a groundbreaking report. (Disclosure: I assisted with the development and writing of this report. But don’t let that fool you. It is still groundbreaking.)
Why is it groundbreaking? Because it’s first in many ways:
I am convinced. Groundbreaking it is. It has been a great pleasure and privilege for me to assist such a fabulous organization committed to not only reporting, but to living its sustainability journey with passion and purpose.

I’ll be honest and say that I was a little (a lot) (ok, a ton) skeptical when GRI announced the Materiality Matters check. In this check, GRI promises to analyze responses to 11 materiality disclosures, and ensure that the responses meet the reporting requirements, are correctly located in the report and, equally as important, are easy to locate. I thought this check was probably not worth bothering with. How hard can it be to get a few disclosures in the right place? I felt that the check should include confirmation of the location of all the Disclosures on Management Approach and the Performance Indicators that are required reporting once a company has declared its material Aspects. In fact, I still feel that this would be an important addition to help ensure the integrity of a report.

However, my skepticism faded when I realized that there is room for error. GRI required us to make some modifications to the draft report in order to pass the Materiality Matters check. We had an incorrect page number in the index, an incomplete link to an external assurance statement and we needed to add “disclosure labels” in the body of the report to help the reader locate specific disclosures. Little things, but important ones for report users. And important for reporting companies, because in these little things lies a certain attention to detail that can make a report navigable, coherent and, most importantly, credible. In the end, I was pleased that the folks at Caesars Entertainment took the brave step of submitting their report to GRI scrutiny, and was entirely relieved when GRI delivered the Materiality Matters icon.

Over several months, I have come to know many of the Caesars people, and engaged with over 50 executives and staff in thousands of minutes of VOIP, landline, cyberspace and broadband. No, I didn’t actually get to Caesars Palace in person this time around, but I did feel that I was there in spirit as I enjoyed many spare minutes playing Slotomania.

One of the fascinating parts of this reporting process was the review of Caesars material issues – this was done in several meetings with managers within the company, and external experts from World Resources Institute and others. It was a great process, and resulted, I believe in a more rounded and balanced core of most material issues which formed the heart of the report content.

Another thing that guided the structure and content of this report was the Caesars Code of Commitment. This Code was developed in 2000, and you don’t have to have a very long conversation with anyone at all at Caesars to realize that it’s the way they live their work. The four key pillars of the Code: commitment to employees, guests, communities and environmental stewardship helped create a perfect framework for Caesars’ material issues and the story of Caesars’ CSR and sustainability performance in the last year. Helping create Vibrant Communities is at the heart of this story, and the report demonstrates how Caesars makes a positive difference.I am sure you will want to go take a look at the report yourself, so I won’t spoil your fun. A few highlights, however, to whet your appetite, from Caesars’ accomplishments in 2012:

By the way, Caesars also publishes key data which reports the company’s contribution to helping develop Vibrant Communities in different states across the U.S. So if you live in Arizona, Nevada, Mississippi or Pennsylvania, for example, you can download data that is specifically relevant to your community.

And by now, you probably know what I am going to say next. Read the report. Give feedback. 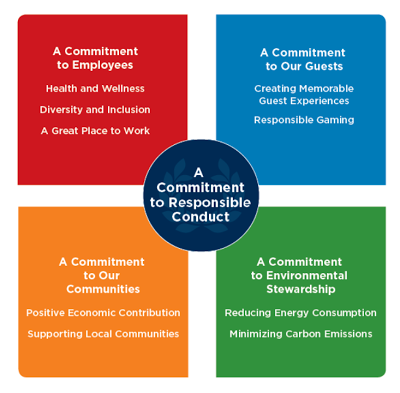