You could say that Jeff Kaffee was the first in the electric field.

One reason for this customer’s satisfaction is how little impact the Volt has on both the environment and his wallet: Kaffee traveled those 12,000 miles on only 26.1 gallons of gas.

That comes out to a lifetime average of 460 mpg for his Volt; the average mpg for U.S. vehicles is around 23 mpg, according to the latest Bureau of Transportation Statistics figures.

That’s a lot of bang for your buck. According to an AAA report, the average price for gas during the last two years was about $3.56/gallon, which means Kaffee has only spent approximately $92.92 on gas since purchasing his Volt, averaging 15 miles of driving per day.

The Volt is able to save Kaffee on fuel because its gas-powered engine only engages when the battery runs low, which for the latest model doesn’t occur until the 38thmile of driving, according to EPA estimates.

Kaffee traded in his Toyota Prius for the keys to the Volt. He told Green Car Reports that while he liked his Prius “the Volt is everything that car was and a lot more – better driving, and with more overall range.”

Chevy sold three times as many Volts last year as it did in 2011, when the EV debuted. To meet growing demand by an increasingly environmentally-conscious consumer, General Motors continues to develop energy alternatives and advanced technologies that help reduce dependency on petroleum, improve fuel economy and reduce emissions. We recently introduced two new models to our electric vehicle lineup: the Chevy Spark EV and Cadillac ELR.

Like any good business, we are committed to growing our customer base, and the EV market is growing. We are also committed to keeping every one of our customers satisfied – the very first customer and all who follow. 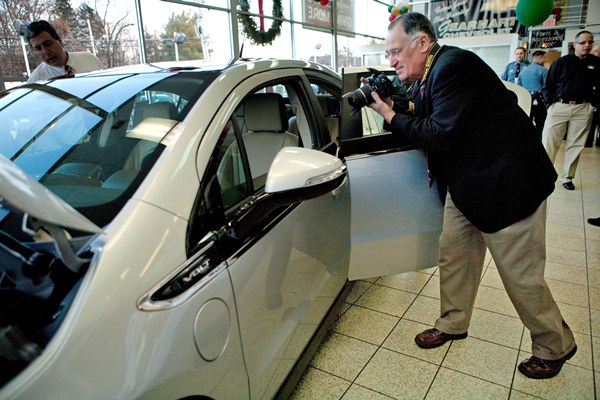