In this webinar, Maureen Guttman, President of the Building Codes Assistant Project (BCAP) will provide an essential overview of the most recent code hearings that will determine 2018 codes.  Guttman will offer information about:

About our Presenter: Maureen Guttman
Maureen is a licensed architect with over twenty-five years of experience in energy efficient and green building design. As BCAP’s President, Maureen oversees a nationwide campaign to support the development and adoption of current model energy codes. In addition, she directs several technical, outreach, and advocacy projects to help various stakeholder groups realize the benefits of energy codes and efficient buildings. Maureen has served on several energy and green construction code development boards, including the development committee for the International Green Construction Code, and this year will serve on the Public Hearing Committee for the Commercial Energy Code. In 2010 Maureen was awarded the President’s Award by the Pennsylvania Chapter of the American Institute of Architects in recognition of a career dedicated to advancing building code adoption and enforcement, and incorporation of sustainability into regulated building practices. Maureen holds a bachelor’s degree in architecture from Carnegie Mellon University
. 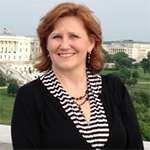