Adam Dant Kicks Off ‘The Homecoming’ Series at Bloomberg SPACE

The Bloomberg SPACE gallery at our London office in Finsbury Square has now unveiled its latest commission to the public, The Budge Row Biblioteque by renowned artist Adam Dant.

The work marks the first part of the 2015 Bloomberg SPACE series ‘The Homecoming’, a program of commissions featuring four artists’ exploration and response to the history and architecture of the City of London. Dant’s exhibition encapsulates two millennia of the everyday life and times of Budge Row, a lost London street, through delicate ink drawings and a scale model of a Victorian taxi driver shelter.

London-based Dant is known for his elaborate drawings and maps. He studied Fine Art and Printmaking at The Royal College of Art in London and was awarded the prestigious Jerwood Drawing Prize in 2002.

Since 2002, Bloomberg SPACE has collaborated with more than 470 artists and has commissioned over 120 new works of art. The gallery complements Bloomberg’s existing program of innovative arts sponsorship and further extends the company’s support of a wide range of arts and charity projects throughout Europe and the world. 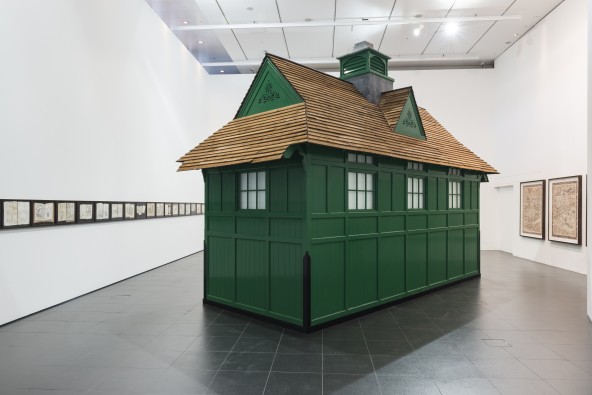