Big Cat Week in Europe: How a Sculpture, a Hashtag and Selfies Are Helping Nat Geo Save Big Cats Around the World

Nat Geo Wild Europe launched its sixth annual Big Cat Week in February. Each year, Nat Geo Wild sheds light on the plight of big cats around the world with a week of premieres. More than a television event, Big Cat Week is an extension of the Big Cats Initiative (BCI), a long-term commitment by the National Geographic Society to stop poaching, save habitat and sound the call that big steps are needed to save big cats around the world. This global initiative actively supports on-the-ground conservation projects and education to help stem and eventually reverse the rapid disappearance of big-cat populations.

This year's Big Cat Week is headlined by a range of programming, including "Big Cat Games," "Vanishing Kings: Desert Lions of Namib" and "The Lakeshore Killers."

Big Cat Week in the U.K.

To kick off this year's Big Cat Week, Nat Geo Wild in the U.K. unveiled a specially commissioned sculpture in Trafalgar Square on Jan. 28: a fifth lion on a plinth, made of more than 500 clock parts to highlight that time is running out for big cats in the wild. We partnered with local celebrity Rachel Riley ("Countdown," "8 out of 10 Cats Does Countdown").

Working closely with National Geographic's BCI, big-cat experts and National Geographic Explorers-in-Residence Beverly and Dereck Joubert, facts and information were provided to the public and press during the launch. The sculpture was auctioned with the money raised donated to BCI. The stunt garnered more than 3.6 million impressions on Twitter the same day and was a trending topic in the U.K. So far, there have been 64 press features, including two broadcast interviews, seven national newspaper articles and 43 online stories.

Big Cat Week also saw the launch of a robust online campaign, #MyBigCatSelfie, where viewers and fans posted selfies with their cats on Twitter and Facebook. This campaign started last year in the U.K., reaching 18 million people on social media, including local celebrities. This year, #MyBigCatSelfie went even bigger, rolling out simultaneously across more than 20 markets in Europe and Africa on Feb. 1.

Nat Geo Wild in France took it a step further, creating a mobile app and website where users can upload a photo and have their faces transformed into a big cat. Working closely with the BCI, one euro will be donated for each post to the site, supporting the BCI mission. So far, more than 2,531 users have posted their photos to the dedicated site in support of Big Cat Week and BCI, including five French celebrities (Christophe Beaugrand, Elodie Frégé, Alexandra Golovanoff, Audrey Marnay and Aure Atika).

In addition to the campaign, multiple Europe-wide interviews were held with big-cat specialist Boone Smith for one of the shows that aired during the week. Boone spoke about the plight of big cats, and some of the press coverage can be seen below.

Nat Geo Wild's sixth annual Big Cat Week is off to a roaring start as it continues to roll out around the globe! 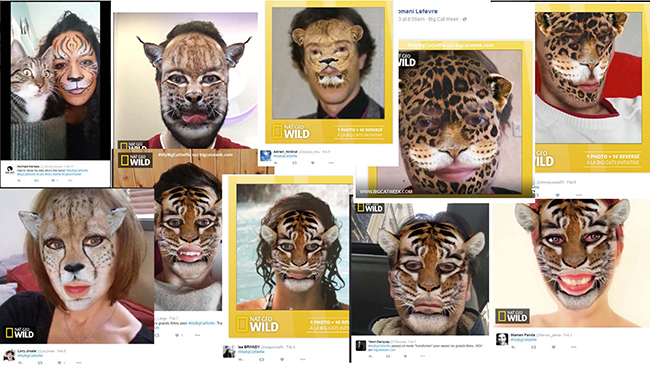