Oct 11, 2016 10:40 AM ET
Tweet This:
.@ConnectToGood "Brackets For Good and @ATT Team Up on New Bracket-Style Fundraising Tournament for Non-Profits" http://soc.att.com/2dYviDA
Blog
Connect To Good

INDIANAPOLIS, October 11, 2016 /3BL Media/ – Brackets For Good and AT&T announced today a collaboration to introduce a first-ever nation-wide Brackets For Good tournament — just in time for basketball’s Big Dance. Tipping off on Feb. 24, 2017, 64 large national charities will compete online in a single-elimination bracket-style fundraising tournament. In addition to raising awareness and funds, the winning organization will receive a $100,000 contribution from AT&T. It’s competitive giving. Everybody wins.

Indianapolis-based Brackets For Good hosts online, bracket-style fundraising tournaments every March in communities around the United States. Participating non-profits rally enthusiastic donors to out-fundraise their opponents in order to advance. Through grassroots excitement, marketing, and corporate involvement, non-profits raise exposure and funds for their organization, gain access to free fundraising tools, and are introduced to new donors.

Since its 2012 kick-off contest in Indianapolis, more than $2.75 million has been raised for local charities. Thirty percent of contributions received by participating charities have been from first-time donors to those organizations.

Thanks to AT&T and its support of a national tournament, the awareness and fundraising opportunity — previously only available to local nonprofits in communities across the country — is now available to large, national non-profit charitable organizations. Now, the entire country will be able to get in on the fun and social good that comes from competitive giving.

Brackets For Good USA 2017 presented by AT&T will take place concurrently with the 11 local Brackets For Good tournaments starting Feb. 24 and ending March 31, 2017. To up the stakes and further spur the excitement, AT&T is providing a $100,000 contribution to the winning non-profit.

“AT&T has a long history of strengthening the communities where we live and serve,” said Beth Shiroishi, vice president, Global Corporate Social Responsibility, Strategy & Insights at AT&T. “We are excited to collaborate with Brackets For Good to extend that impact by raising awareness of organizations strengthening communities across the country in a fun and engaging way.”

How the tournament works
The tournament tips-off Feb. 24 with 64 charities, each paired in friendly, yet competitive match-ups against another non-profit. Charities advance through the rounds by rallying their supporters and scoring more points than their opponent ($1 raised = 1 point). At the end of each round, the non-profit with the most points in the individual match-up advances to the next round, the points are reset, and the fundraising continues. The single elimination, bracket-style tournament will continue through March until a champion is crowned on March 31. The winning charity will receive an additional $100,000 championship contribution from AT&T.

Competing non-profits play for free and keep donations received during tournament play, no matter how many rounds they last.

"Brackets For Good exists because we believe that communities are strengthened when more people learn about and support charitable organizations that operate in service to the community," said Matt McInytre, executive director and co-founder of Brackets For Good. "We’re thrilled to team up with AT&T to bring the excitement of Brackets For Good to non-profits and non-profit supporters across the nation.”

How to get involved

Interested non-profit organizations should register to participate in the 2017 tournaments by Friday, Oct. 28, 2016. Registration is free at https://bfg.org/nonprofits/registration.

Starting Feb. 24, 2017, online donations made at bfg.org will help your favorite non-profit organization advance in Brackets For Good and get one step closer to the championship prize. Donors can also give to participating local charities competing in community-based bracket-style tournaments.

“AT&T’s introduction of Brackets for Good USA 2017 not only will impact the 64 organizations in the nationwide tournament, but will also positively impact the additional 704 non-profits participating in the local tournaments taking place across the country at the same time,” said Reid McDowell, partnerships and marketing director of Brackets For Good. “It will be exciting to watch the energy and excitement of bracket season to be put to good use in raising awareness and funds for deserving charities.”

About BRACKETS FOR GOOD
Brackets For Good is an Indianapolis, IN based 501(c)3 charitable organization focused on activating new donors, and increasing awareness for other nonprofit organizations through competitive, online fundraising at no cost. For more information visit bfg.org.

About Philanthropy & Social Innovation at AT&T
AT&T is committed to advancing education, strengthening communities and improving lives. Through its community initiatives, AT&T has a long history of investing in projects that create learning opportunities; promote academic and economic achievement; or address community needs. AT&T Aspire is AT&T’s signature philanthropic initiative that drives innovation in education by bringing diverse resources to bear on the issue including funding, technology, employee volunteerism, and mentoring. Through Aspire, we’ve passed the $250 million mark on our plan to invest $350 million in education from 2008-2017. 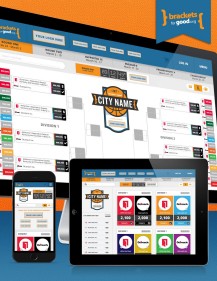