Over the three months surrounding the United Nations World Food Day in October 2016, Cargill employees and businesses around the globe showcased the company’s commitment to nourishing the world in a series of programs and events focused on food security and nutrition.

Under the backdrop of a global focus on food and nutrition from September to November, they set a goal to reach 30,000 young people over three months. In total, the results far surpassed the initial target. Globally Cargill employees participated in 248 activities in 24 countries – and reached more than 260,000 people in the process, including 124,000 children, students and young people.

Cargill invested $15.5 million in the 2016 fiscal year on food security and nutrition programs around the world.

“Cargill is committed to nourishing people and protecting the planet every day,” said director of corporate responsibility and partnerships Taryn Barclay. “This campaign linked our efforts across borders and businesses to create a local and global impact.”

The campaign took advantage of Cargill’s ties both to local communities and national and international organizations, from employees serving at a soup kitchen in the Netherlands to a $1 million grant to the World Food Program USA to establish new programs in multiple countries.

In Argentina alone, for example, Cargill had a hand in 13 different projects – improving kitchen facilities at local schools, providing better animal feed and conducting training in food safety. “We promote the involvement of Cargill employees in organizations within their community with the purpose of nourishing the world in a safe, responsible and sustainable way,” said Julian Ferrer, director of corporate responsibility and sustainability for Cargill in Argentina. “We are confident that we are moving in the right direction and will continue working with partner organizations to create better nutrition conditions in the world.”

And in Canada, employees nationwide participated in around 40 events, from a social media fundraising campaign to local food drives. In the month of October alone, they raised $82,000 in cash and product donations – enough for about 246,000 meals – and collected about 15,000 pounds of food, enough for another 15,000 meals.

“We really get our local Cargill Cares councils involved, which is quite nice. This year, we were really happy with the results” said Connie Tamoto, communications and community relations manager for Cargill corporate affairs in Canada.“

The World Food Day campaign push brought Cargill’s donations in the country to about 300,000 meals in 2016 – something employees “can be tremendously proud of,” said Katharine Schmidt, executive director of Food Banks Canada. “We are very honored to include Cargill as a partner in our work.” 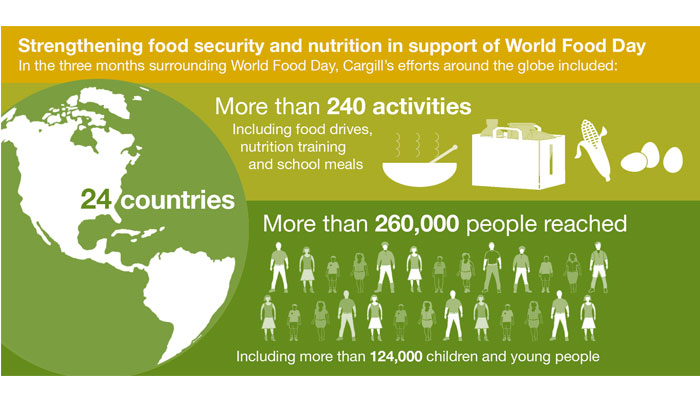