Coast to Coast and Border to Border: GE Plants Will Supply Natural Gas Fuel for Trucks

A new report from the International Energy Agency released on Tuesday estimates that the U.S. will become a net energy exporter by 2030 and that natural gas will overtake oil to become the most abundant fuel in the American energy mix. GE is developing technologies that are already helping customers to take advantage of the gas boom.

Just this week GE said it would supply Clean Energy Fuels Corp., America’s largest manufacturer of natural gas for transportation, with new equipment that will produce liquefied natural gas for a network of gas stations for trucks along major U.S. highways. Mike Hosford, general manager of unconventional resources for GE Oil & Gas, told Reuters that liquefied natural gas equipment could grow into a $1 billion market for GE over the next five years.

The companies estimate that LNG could help truck fleets cut fuel costs by more than 25 percent compared to diesel and lower emissions. “What we are doing is based on economics without using any government support,” said Andrew J. Littlefair, president and CEO of Clean Energy. “Once the big boys do it, everybody else will have to do it."

Clean Energy, whose largest investor is the energy entrepreneur T. Boone Pickens, is building out a network of 70 LNG filling stations along large U.S. interstates placed about 250 miles apart and has plans to double the number next year. “At the end of this year, you are coast to coast and border and border,” Littlefair said. “You have a nice skeleton and the work just started.” 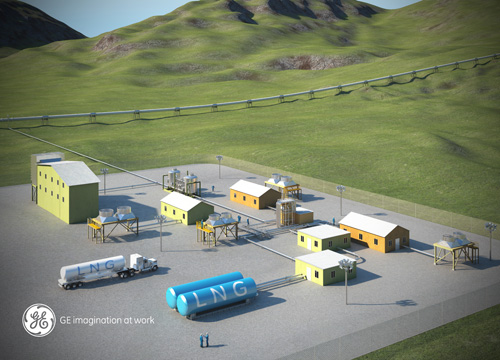