ESG origins
The concepts of Socially Responsible Investing (SRI) and Environmental, Social, and Governance (ESG) measures have evolved from a mere moral concept, in which investors would avoid industries that caused harm to society to complementary measurements of companies’ performance. The desire to hold companies accountable for their social impact was driven by global revolutions on topics such as global warming and civil rights. In the 21st century, many are questioning Milton Friedman’s theory that the sole responsibility of business is to increase its profits. And in fact, the world’s top-performing CEOs are no longer measured only based on their financial performance but also on their engagement with social and environmental issues, as evidenced in the 2015 Harvard Business Review’s ranking of CEOs.

Is there a connection?
New visions of corporate social responsibility continue to evolve with the inclusion of ESG factors into investment discussions. Given this new focus, CECP sought to inquire into the connection between ESG and financial performance. To do this, we compared CECP companies, which are a part of a coalition focused on corporate societal engagement, and non-CECP companies.

Corporate Sustainability goes along with financial performance
Across all of the measures listed below, we compared 2013 to 2014 performance (2015 data was not yet available for all companies).
Click here to see the one-pager showing all results summarized below.

ESG measurement is not a “nice-to-know” indicator of a company’s overall performance, it is a crucial component of most companies’ reporting. Click here to read a Corporate Performance 2014 Snapshot with key ESG and financial performance metrics for the world’s largest companies. Tweet about your ESG accomplishments over the course of the last couple of years @CECPTweets and reshape the way the corporate world cohabitates with the environment, society, and its employees and shareholders.

Sources: Giving in Numbers: 2015 Edition data from CECP, in association with The Conference Board, and Bloomberg Terminal

CECP is a coalition of CEOs united in the belief that societal improvement is an essential measure of business performance. Founded in 1999, CECP has grown to a movement of more than 150 CEOs of the world’s largest companies across all industries. Revenues of engaged companies sum to $7 trillion annually. A nonprofit organization, CECP offers participating companies one-on-one consultation, networking events, exclusive data, media support, and case studies on corporate engagement. 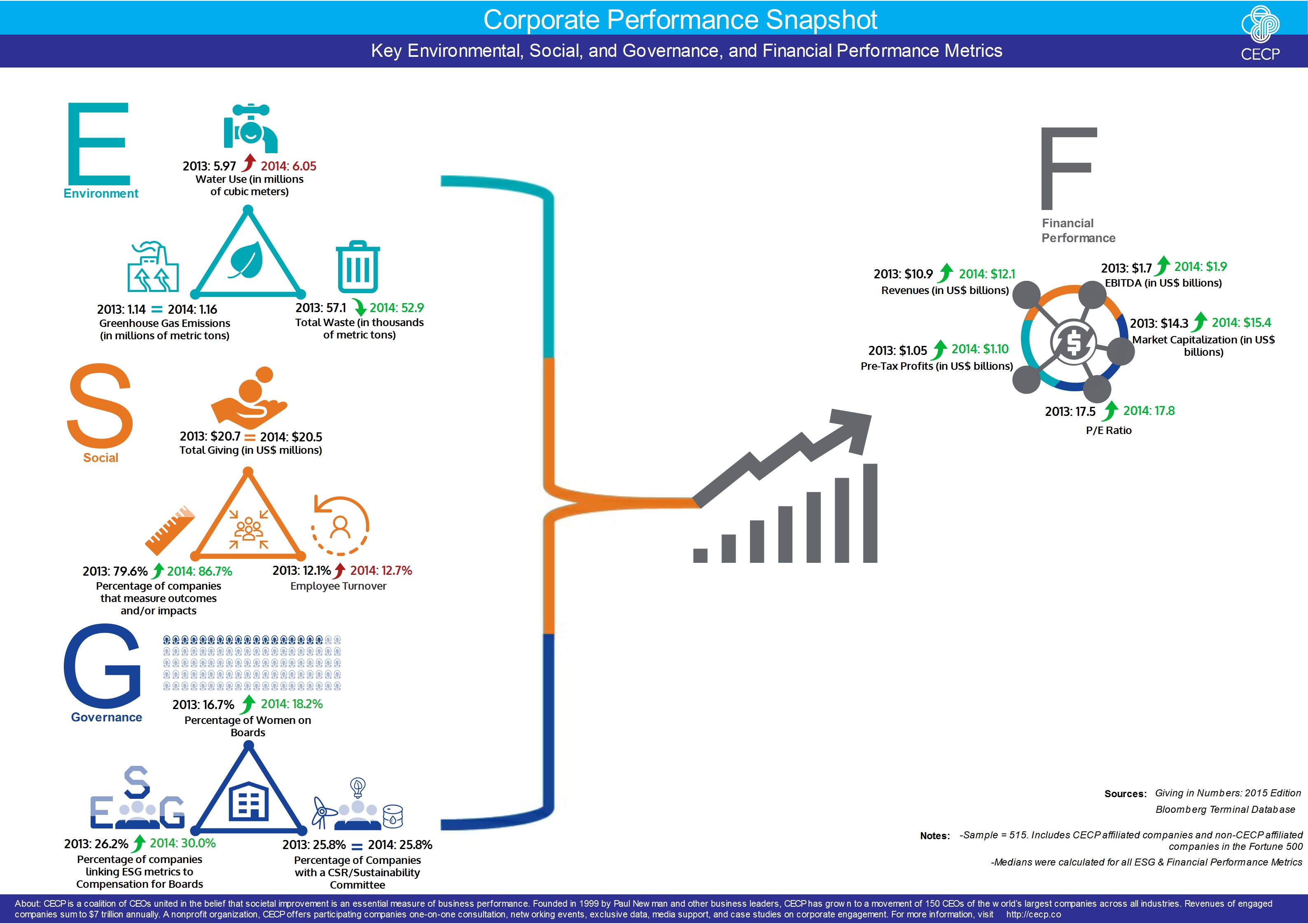