In June of last year, standing alongside Secretary Hillary Clinton at the Clinton Global Initiative America meeting, Symantec first launched the Symantec Cyber Career Connection (SC3). Almost one year to the day, President and Chief Executive Officer of Symantec Michael A. Brown joined R. Chandrashekhar, President of the National Association of Software and Services Companies (NASSCOM), in announcing the expansion of SC3 to India. SC3 is designed to help close the cybersecurity skills gap by attracting, educating, and training underserved young adults for careers in cybersecurity. We’ve followed the U.S. pilot program throughout the year – from meeting the dedicated partners, Year Up and NPower, to hearing from the students and their journey in the program – and earlier last month, we announced the expansion to U.S. military veterans. And now, we’re thrilled to take it one step further and expand this program beyond the U.S. borders, a step that moves us towards bridging the global workforce gap in cybersecurity, and providing new career opportunities for young adults in India.

Cybersecurity threats are a global issue and are on the rise. The number of cyber security incidents reported in 2014 increased globally by 48 per cent to $42.8 million. By 2019 the demand for cyber security professionals is expected to rise to 6 million, but a gap in skills will leave a projected 1.5 million of those positions unfilled. 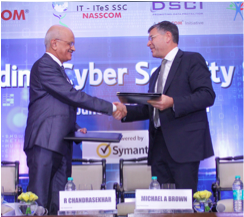