"I have always believed in the ideology of one of my friends and idols, Norman Lear, that the way to acceptance is understanding," Murphy said. "You have to see it, experience it in your house and life to empathize. I think the success of Glee and Modern Family brought gay kids and gay families to millions of people who think they didn't know those kinds of people, and then suddenly literally in the course of one month they did. To me, that is the great legacy of these shows and is why public opinion, I think, has changed so radically and so quickly."

"We've heard from so many gay teens who have said they feel comfortable coming out because their parents loved Mitch and Cam," Levitan said. "We are very proud to be on the right side of history."

The event also featured several performances by Glee cast members, including Alex Newell, who plays the transgender character Wade "Unique" Adams on the show. Unique was the focal point of a recent episode entitled "Transitioning," in which football coach Shannon Beiste (Dot Marie Jones) returns to McKinley High as Coach Sheldon Beiste, and he struggles to adjust to his new life as a man. He finds support from Unique, who leads a 200-person transgender choir in a performance of "I Know Where I've Been" from the musical Hairspray. FOX worked with GLAAD to assemble the choir.

"Everything we do is through education, through a laugh," said Newell. "We're teaching society that not everyone is the same, and people are different, and their voices have to be heard too."

As part of the fundraising section of the ceremony, Glee's Darren Criss and American Horror Story's Sarah Paulson helped auction off a walk-on role on the upcoming season ofAHS, a series Ryan Murphy created for FX. In total, Saturday's Awards Dinner helped raise more than $618,000 for their initiatives. 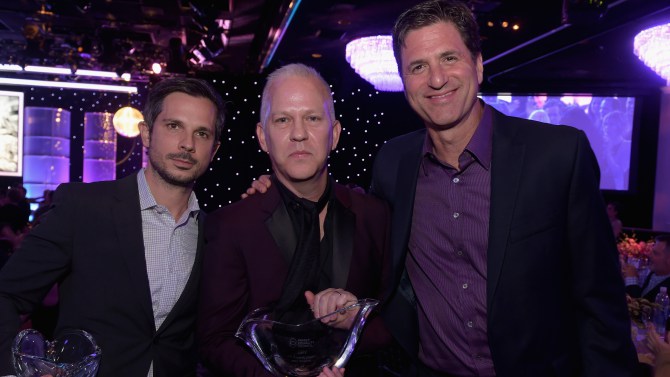