When we say we have employees at GM who walk the walk when it comes to sustainability, we’re not just talking about our sustainability executives.

One of our employees with a vested interest in lowering her carbon footprint is Cynette Cavaliere, a senior environmental project engineer at our Rochester (N.Y.) Operations facility.

She’s been driving a Chevrolet Volt for a few years, which isn’t remarkable on its own. What makes her sustainability story special is the solar panels (18 of them) on her roof that help power her Volt.

With a solar system providing a charge to her electric vehicle, she doesn’t have to concern herself with the idea that the electricity powering her car has a fossil fuel source.

“It was important to me that I wasn’t just taking credit for a clean energy vehicle by using electricity generated by a remote location,” said Cavaliere. “Generating solar energy to offset my electricity use was planned from the moment I decided I was getting a Volt.”

One would think that investing in solar panels and an electric vehicle would be enough to rest easy at night, but that’s not the case with Cavaliere.

As a huge proponent of sustainability, she wants to share that message with others.

Cavaliere was part of an internal GM webchat with The Union of Concerned Scientists where she, along with other employees, learned from Dr.  Brenda Ekwurzel, the author of “Cooler Smarter: Practical Steps for Low-Carbon Living”, real-world examples to lowering your carbon footprint. As part of that webchat, she received a copy of the book.

Surprised by the variety and ease of the carbon emission reduction ideas presented in the book, Cavaliere hit the road to tell the world (okay, maybe just Rochester) ways in which they could cut down on their impact on their environment.

As an active member of the Penfield (N.Y.) Environment & Energy Advisory Committee, Cavaliere was asked to present her findings to the community as part of an Environmental Discussion Series, after discussing the book at one of the committee’s monthly meetings.

So on a Monday evening this past October, Cavaliere got up in front of a small crowd at the Penfield Town Hall Auditorium and began to share simple, effective and often cost-saving ideas, with some help from the UCS book.

“I knew that I knew enough to be environmentally responsible, but after I read the book, I realized there was much more I wasn’t doing that I could easily do to reduce my personal impact,” said Cavaliere. “My natural instinct was to share those tips with friends and family.”

She urged the attendees to pick one or two (or 10) practices they could implement to drive down their own carbon emissions.

“We titled the session ‘10 Things’,” Cavaliere adds. “Then I found a list on the UCS website with the top 10 ways to reduce your carbon emissions, so it lent itself perfectly to the discussion.”

But there was one more step to follow; something Cavaliere was already doing, so it didn’t take much encouragement to add it to her talk.

“There was actually an eleventh way to reduce your emissions, with the last one being to spread the word,” says Cavaliere. “I’d like to think I’ve got a head start on that!” 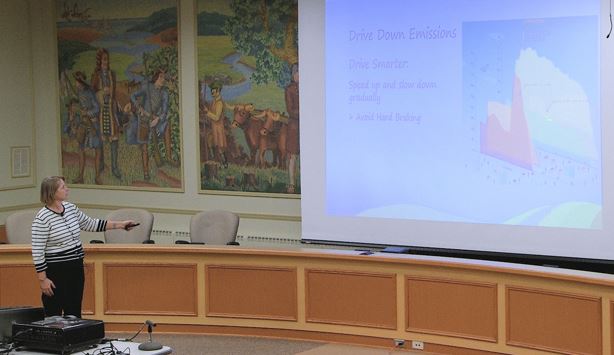