Real Estate Should Boost Productivity, Not Thwart It

by Richard Barkham, Global Chief Economist at CBRE
Jul 14, 2015 8:05 AM ET
Tweet This:
How can real estate be a tool for #sustainable growth and productivity? http://bit.ly/1CncRmC #CSR @CBRE
Blog
CBRE Blueprint: View from the Top

The state of the “productive” worker in the United States is at an interesting crossroads.

For one, the rise of super-productive, emerging nations has pitted the U.S. against stiff labor competition in countries like China and Mexico. More federal regulations and fewer trade agreements — the U.S. has been part of just two of the 400 regional free trade agreements that have been launched since 1995, according to the Wall Street Journal — have hurt the economy.

Throw in high taxes and a host of new regulations on business and you can see why these developments have damped the productivity growth that generates income growth for the middle and working classes.

But there is another factor impeding America’s productivity growth: real estate that is too scarce or too old.

From cities like San Francisco, where high residential rents have priced out plenty of talent, to vast swathes of America’s office inventory that is in dire need of upgrades, it is becoming evident that real estate needs to change and modernize in order to meet the ever-increasing demands of a faster and more dynamic marketplace.

Let’s start with San Francisco, the epicenter of the American tech sector. From 2010 to 2013, the number of people working in tech occupations — which includes software developers, programmers and engineers, among others — has increased by 44.4 percent, according to CBRE’s recent report, “Scoring Tech Talent.” While the average wage of these occupations grew to $106,073 during that same time period (an increase of 3.3 percent), apartment rents in the area also shot up.

The average apartment rent in San Francisco (as of 2014) is $3,425 per unit per month, a staggering 61 percent increase since 2009. In fact, four of the five most expensive American cities in terms of apartment rents and cost of living are in the San Francisco Bay area, including Oakland and Silicon Valley.

Then there is the limited availability of these rentals in San Francisco. The city said in a recent report that Airbnb’s business model of turning apartments into short-term rentals “[takes] away already scarce housing for long-term rentals.” Airbnb aside, what is abundantly clear is San Francisco’s lack of new apartment supply is affecting those workers who seek to live close to a tech epicenter.

If you want to keep growth rates up, you have to make sure that the workers can actually get to business epicenters with relative ease.

Pushing workers to the fringes of San Francisco because of a limited apartment supply and high rents ultimately stymies productivity growth and overall economic growth.

A second factor is the outdated office stock that dates back to the 1970s, ‘80s and ’90s. These offices — picture vast caverns of cubicles that seem to only highlight the routine functions of a company’s day-to-day operations — aren’t terribly exciting to work in. They’re not terribly productive, either. The tech offices of today have literally torn down the walls of these older workplaces, redesigning them into something that’s rooted in collaboration, spontaneity, and, most importantly, creativity.

Samsung and Yahoo, among others, have all designed their Silicon Valley offices around the concept of collisions, which Harvard Business Review defined in a 2014 article as “chance encounters and unplanned interactions between knowledge workers, both inside and outside the organization.”

When looking at the headquarters of Telenor, a Norwegian telecommunications company, Harvard Business Review found that by changing the concept of the office to a flexible space with no assigned seating, the company went from “a state-run monopoly to a competitive multinational carrier with 150 million subscribers.”

The Telenor headquarters, in other words, was not just real estate, but “a communication tool.”

Real estate is no longer just a place to hang one’s hat or to sit at a desk. It has evolved into a crucial tool of business development. Developing new residential properties in expensive markets like San Francisco and refreshing the office stock to reflect the current workplaces of today will help boost productivity — not counter it. 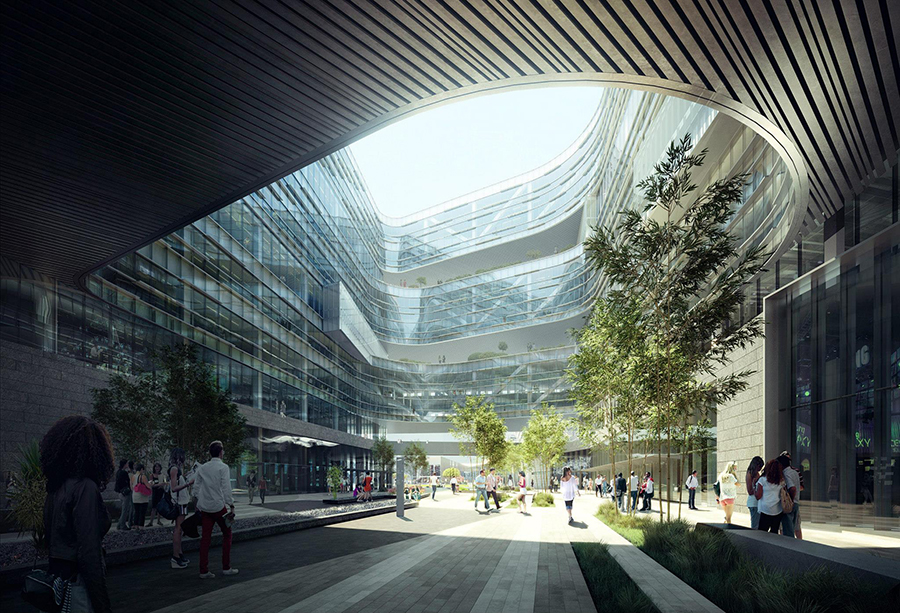