DETROIT, June 18, 2015 /3BL Media/ – Engineers developing the 2016 Chevrolet Malibu put the new midsize sedan on a strength-training program, making it sweat out a pound here and a gram there, in a quest to make it more fuel efficient, stronger and safer.

The result is an all-new Malibu that is nearly 300 pounds (136 kg) lighter than the current model – an achievement that not only gives it the segment’s lightest base curb weight, but also contributes to an estimated 48 mpg in city driving for the hybrid model and 37 mpg highway for the 1.5L turbo base engine. A lighter curb weight will also improve ride and handling.

“Imagine you’ve got a 300-pound lineman riding on the roof of your car and he decides to jump off – you’re going to notice a change in performance immediately,” said Jesse Ortega, chief engineer. “That’s what we’ve done with the 2016 Malibu, with the mass savings spread throughout the vehicle, providing greater overall balance, a more responsive and agile driving experience and lower fuel consumption.

“The Malibu team was challenged to look for weight savings in every area of the vehicle, no matter how small, because every gram adds up,” said Ortega. “The aim was to make Malibu the most mass-efficient car in its class.”

Here are five of the most noteworthy mass-saving achievements:

1. Leaner, stronger body structure
More than a third of the 2016 Malibu’s mass savings – approximately 120 pounds (54 kg) – comes from its all-new body structure, which features greater use of high-strength steels, enabling the use of thinner components in some areas, while delivering comparable or better crash performance.

The stronger-yet-lighter structure is also stiffer than the current model, which allowed suspension components to be tuned more precisely. Engineers had less body flex for which to account, contributing to the new Malibu’s sharper ride-and-handling reflexes.

Development of the Malibu’s structure is the result of extensive computational analysis, which employed sophisticated modeling programs to simulate dozens of design iterations that indicated the most strategic placement for high-strength steel elements such as the pillars and rockers – all while maintaining higher targets for strength, stiffness and crashworthiness.

“The analysis took the guesswork out of the Malibu’s development, allowing the chassis to be developed with the just-right level of structural components,” said Amir Sewani, structural engineer. “After the structure was determined, we started looking at all the components that are attached to it, evaluating where they could be optimized for lower weight.”

2. Greater use of aluminum
Light and strong, the incorporation of more aluminum in the 2016 Malibu contributes significantly to its lower weight. Examples include an aluminum hood that is 6.6 pounds (3 kg) lighter than current model’s steel hood, and aluminum suspension knuckles and chassis components, as well as lighter mounts.

An additional benefit of the aluminum suspension components is reduced un-sprung mass, which contributes to the Malibu’s responsiveness.

3. Streamlined instrument panel assembly and lighter power accessories
New power window regulators collectively save 4.2 pounds (1.9 kg) – a 34-percent reduction over the current model, while another 2.2 pounds (1 kg) was saved by reducing the complexity of components within the instrument panel. That included simplified construction with more integrated parts – and fewer components in the assembly.

Even the center console has a streamlined, one-piece structural shell that is 1.75 pounds (0.8 kg) lighter than the current model.

4. Lighter leather seats and other soft materials
The Malibu’s available leather seats are collectively 40.6 pounds (18.4 kg) lighter than the current model. Additionally, about 1.5 pounds (0.7 kg) was saved with new trunk liner material and another 1.1 pounds (0.5 kg) was shaved with new, proprietary interior carpet material that also is more durable than the current model.

The 2016 Malibu goes on sale in the fourth quarter of 2015. It will be offered in L, LS, LT and Premier trims, as well as a Hybrid model, which leverages Chevrolet Volt technology to offer segment-best estimated efficiency of 48 mpg city, 45 mpg highway and 47 mpg combined.

Founded in 1911 in Detroit, Chevrolet is now one of the world's largest car brands, doing business in more than 115 countries and selling around 4.8 million cars and trucks a year. Chevrolet provides customers with fuel-efficient vehicles that feature engaging performance, design that makes the heart beat, passive and active safety features and easy-to-use technology, all at a value. More information on Chevrolet models can be found at www.chevrolet.com. 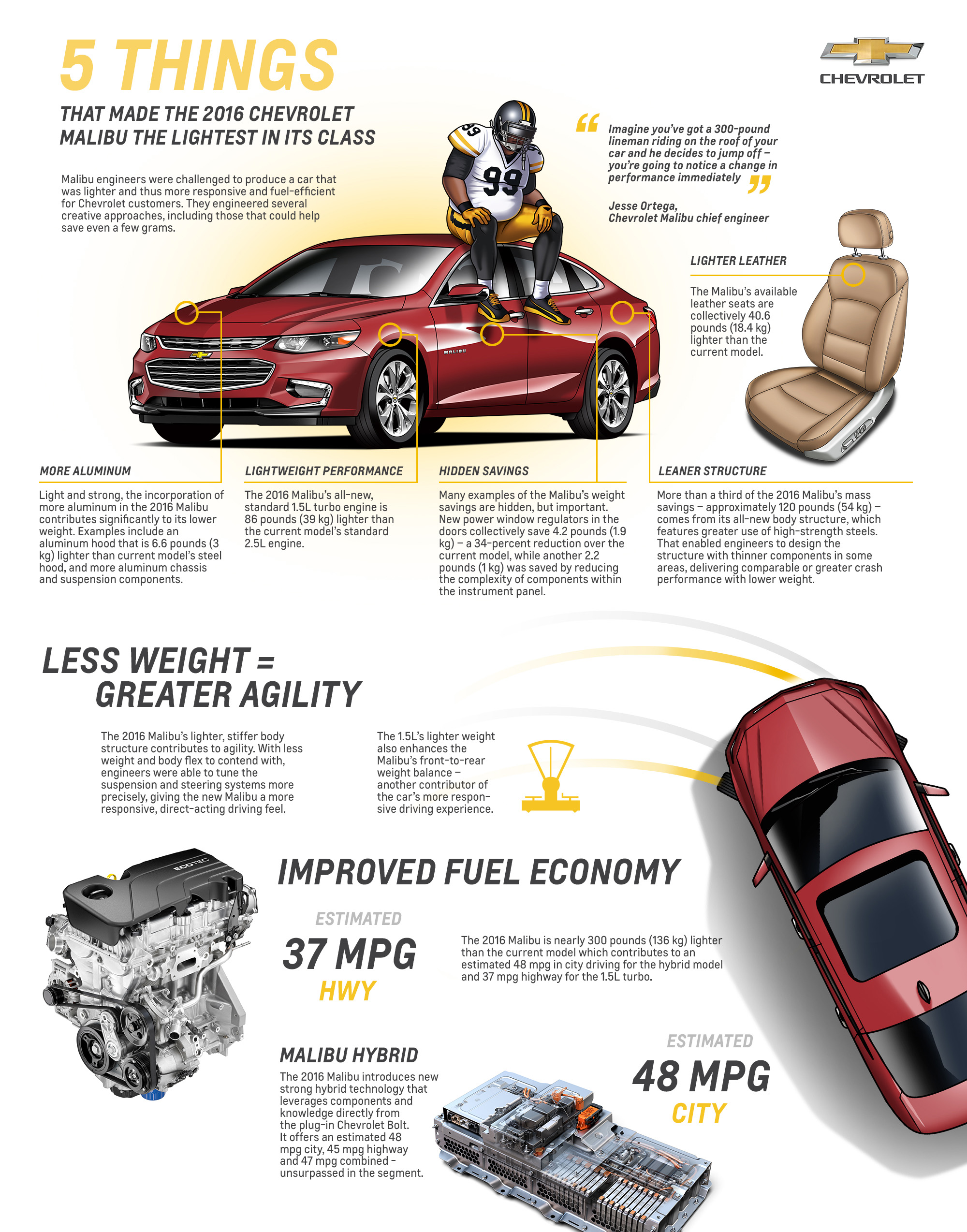