“The EPA’s SmartWay program vision is clearly embodied in the environmental and sustainability mission statement of Bacardi. We strive to transport our premium spirits in the cleanest, most energy-efficient way possible, while reducing the impacts of climate change at every level of our operation,” said Enrique Gomez, Vice-President of Operations for Bacardi USA. “We are honored to be recognized by such a highly respected organization for a cause we are so committed to.”

Bacardi’s transportation efficiencies have shown significant improvement over the past few years. In 2009, 65% of Bacardi shipments out of its Jacksonville, Florida, bottling facility were over the road. In just six years, Bacardi reversed that with just 35% of shipments by truck; 65% by rail.

“EPA is pleased to honor these SmartWay Partners with a 2015 Excellence Award," said Chris Grundler, Director, EPA Office of Transportation & Air Quality. “Through their environmental leadership in greener goods movement, each of these companies is demonstrating its commitment to our shared goal of a healthier, more sustainable future for the communities and families we serve.”

Bacardi USA was one of 11 companies to receive this distinction, representing the best environmental performers of SmartWay’s nearly 3,000 partners. The shipper and logistics Excellence Awardees were honored at U.S. EPA’s Technology Showcase held at the National Vehicle and Fuels Emissions Laboratory in Ann Arbor, Michigan on October 13.

Bacardi partners with Ryder System, Inc. (NYSE: R) – well known for its sustainable logistics and supply-chain solutions for its fleet of trucks, tractors and trailers. Ryder procures all of the Bacardi domestic shipments and has fully supported all Bacardi USA’s environmental & sustainability efforts. Since 2008, Bacardi USA and Ryder have worked together to institute the Bacardi SmartWay Program and have successfully reduced carbon emissions by more than 20%.

Since 2006, when Bacardi started to track its global environmental impacts, the Company has reduced both nonrenewable energy use and greenhouse gas emissions from production by nearly 28%. Over the past nine years, Bacardi has also reduced the weight of its packaging by more than 7% - equivalent to taking 1,100 full truckloads off the road. For global distribution, Bacardi is a member of Green Freight Europe, the sister organization of SmartWay to improve environmental performance of road freight transport throughout Europe.

To learn more about Bacardi and its “Good Spirited: Building a Sustainable Future” environmental initiative for sourcing, packaging and operational efficiencies across the entire Bacardi family of premium spirits brands, visit http://www.bacardilimited.com/good-spirited.

About Bacardi U.S.A., Inc.
Bacardi U.S.A. Inc. is the United States import and distribution arm of one of the world's leading spirits and wine producers. The company boasts a portfolio of some of the most recognized and top-selling spirits brands in the United States including BACARDÍ® rum, GREY GOOSE® vodka, DEWAR'S® Blended Scotch Whisky, BOMBAY SAPPHIRE® gin, CAZADORES® 100 percent blue agave tequila, MARTINI vermouth and sparkling wines, the world’s leading vermouth and the world's favorite Italian sparkling wines, and other leading and emerging brands. www.bacardiusa.com.

About SmartWay
EPA’s SmartWay Transport Partnership is a market-driven initiative that empowers businesses to move goods in the cleanest, most energy-efficient way possible, while protecting public health and reducing the impacts of climate change. Demonstration of a commitment to corporate sustainability and social responsibility through SmartWay provides for a more competitive and environmentally-friendly business environment. Since 2004, SmartWay Partners have saved 144.3 million barrels of oil and $20.6 billion in fuel costs. SmartWay’s clean air achievements (61.7 million metric tons of carbon dioxide, 1,070,000 tons of nitrogen oxides, and 43,000 tons of particulate matter emissions avoided) help to protect the well-being of citizens. http://www.epa.gov/smartway/

© 2015 BACARDI. BACARDÍ, THE BAT DEVICE AND OTHER MARKS APPEARING ON THE BACARDI GROUP PRODUCTS SHOWN AND/OR QUOTED ARE TRADEMARKS OF BACARDI & COMPANY LIMITED OR OF OTHER SUBSIDIARIES OF BACARDI LIMITED 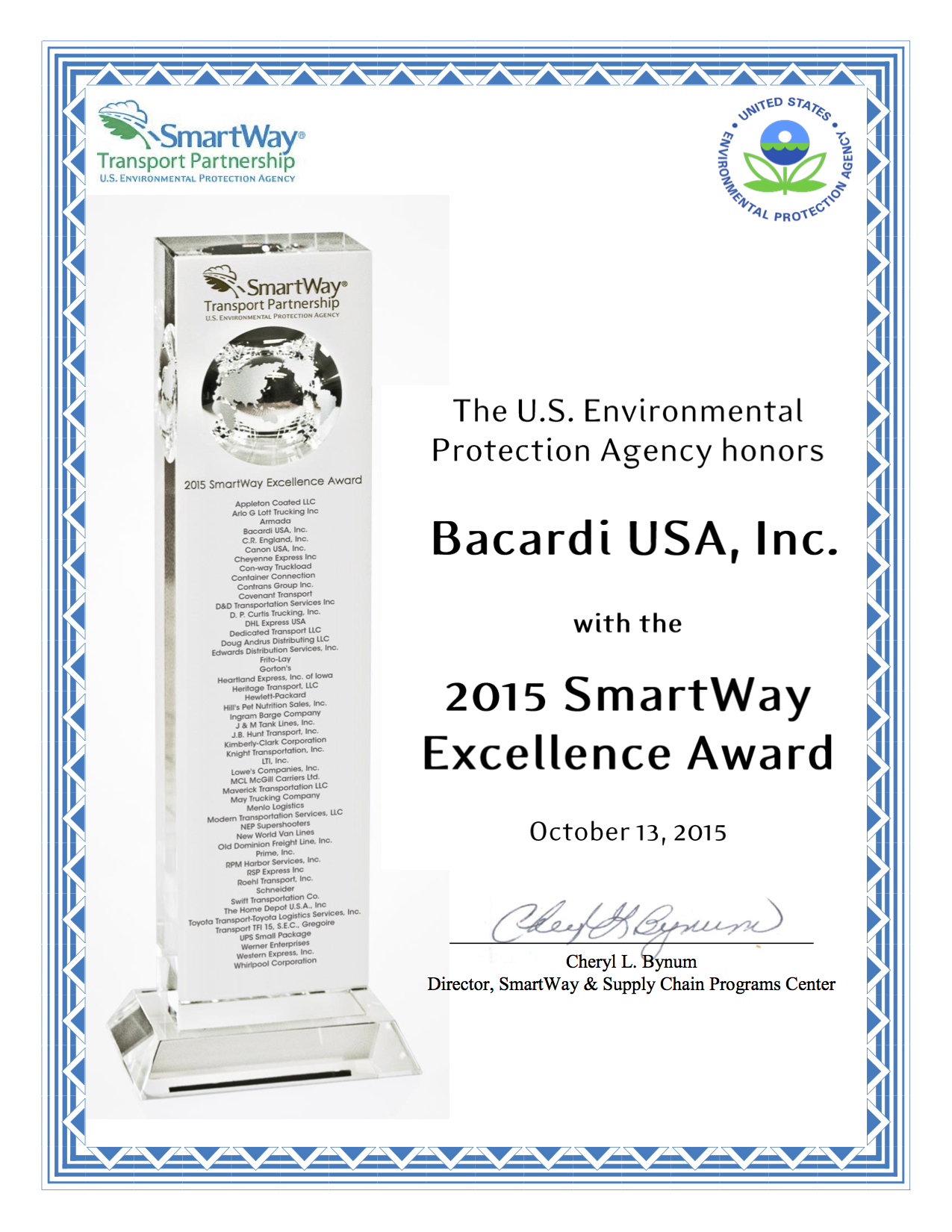