Novemnber 5, 2014 /3BL Media/ - British American Tobacco has launched its latest Sustainability Focus Report, Supporting Farmers’ Livelihoods: The Opportunity, which highlights the important role played by the 100,000 tobacco farmers who supply the Company and proposes a new approach to agricultural policy decision making which will help governments ensure farmers can continue to thrive.

Commenting on the launch of the report, Nicandro Durante, Chief Executive of British American Tobacco, said: “We have a long and proud history in agriculture, working directly with farmers around the world. Tobacco leaf is the most essential part of our product, so the farmers who grow it are absolutely crucial to the success of our business.”

In recent years there has been considerable debate about the social, environmental and economic impact of tobacco growing. As with any commercial crop, governments are right to look at the impacts of tobacco growing. Today’s report proposes five new core principles which British American Tobacco believes can help guide governments’ approach to future policy decision making:

Mr Durante continued: “The farmers we work with are valued business partners. We want them to feel confident about their future and to be self-sufficient and prosperous.”

British American Tobacco buys over 400,000 tonnes of tobacco each year from over 100,000 contracted farmers and third party suppliers around the world. The report details five key areas the Company focuses on in order to support farmers’ livelihoods: farm income; natural resources; infrastructure and resources; skills, knowledge and labour; and community networks.

Mr Durante concluded: “This is a pragmatic, commercial approach to securing our supply chain and ensuring the integrity and quality of our products to satisfy our consumers. I’m committed to a future where all our farmers have the resources they need to be successful and to ensuring farming communities can thrive.”

- Over 400,000 – the amount of tobacco in tonnes British American Tobacco buys every year mainly from Asia, Africa and Latin America

- Over 100,000 – the number of contracted farmers British American Tobacco supports around the world

- 1,000 – the number of leaf technicians employed around the world by British American Tobacco to support the farmers the company works with

Ernst & Young LLP has been engaged by British American Tobacco to provide limited external assurance of this focus report. A full assurance statement, including the scope of work and conclusions, can be found at www.bat.com/assurance

To download a copy of the Report, please visit:
www.bat.com/sustainabilityfocus

The report is also available as a free interactive app for iPad and Android tablets, including additional animated content and a video case study of the Company’s support for farmers in Indonesia.

Search for ‘BAT Sustainability’ in the iTunes App Store or Google Play Store. 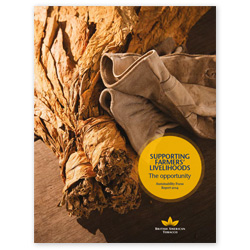