SACRAMENTO, USA, January 20, 2015 /3BL Media/ - Industry leaders turned out in their hundreds on Wednesday, January 14, 2015 to mark the launch of the Mars-UC Davis Innovation Institute for Food and Health and engage in debate and discussion on one of the toughest issues ever faced by global society.

There is a realization that change is needed if our food, agriculture and health systems are to sustain a global population that is expected to reach over 9 billion by 2050. The question is—what do we do, and how do we do it? The Mars-UC Davis symposium, which was streamed live and can be watched back online, gathered experts in diverse fields, from healthy aging, risk analysis, and climate change to answer this critical question.

The participants considered some very different ideas during the day: reducing food waste, creating new crop cultivars, education—and you can track some of these conversations on Twitter using the hashtags #UCDavisMars and #globalfood. Earlier this week, Mars’ Chief Agricultural Officer Howard-Yana Shapiro also talked on LinkedIn about the need to connect the often separate but related fields of food, agriculture and health. Throughout all of the discussions, it was very clear, as Pamela Mars, Member of the Board of Directors at Mars, Incorporated, put it, “To make true progress on global issues, we can’t do it alone.”

The Innovation Institute for Food and Health plans to take forward the idea of uncommon collaborations by bringing together different sectors and disciplines in a diverse ecosystem to deliver big-impact breakthroughs. Professor Elizabeth Blackburn, winner of the Nobel Prize for Physiology or Medicine in 2009, emphasised how important this is in her keynote lecture: “We have to preserve the vitality of a diverse science community and ecosystem, and the launch of the Innovation Institute is a good step in that direction.”

Jagdeep Singh Bachher, the University of California’s Chief Investment Officer, closed the final panel discussion with an optimistic note—“grand challenges bring grand opportunities.” Through the Innovation Institute, UC Davis, Mars and new partners will develop an innovative, inclusive and inspiring environment to bring these opportunities to life at the nexus of food, agriculture, and health. 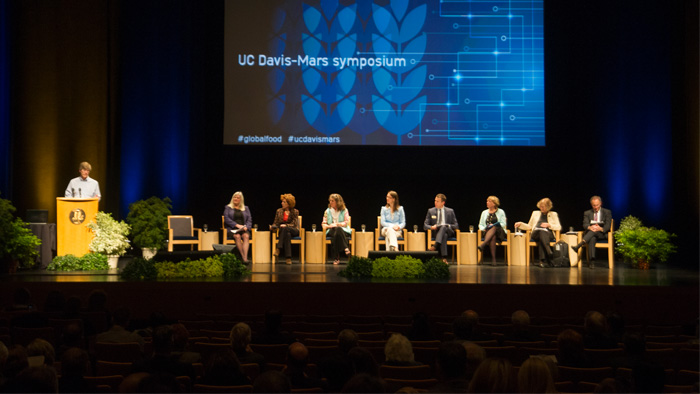