CALGARY, ALBERTA, April 15, 2014 /3BL Media/ - Enbridge Inc. (TSX:ENB) (NYSE:ENB) today published its 2013 annual Corporate Social Responsibility (CSR) Report (csr.enbridge.com/Downloads) which provides a comprehensive overview of the Company's governance, environmental, social and economic performance in 2013. This report is being posted following Enbridge's 2013 Annual Report, which was issued on March 27, to more closely align the reporting of the Company's financial information with the reporting of its social, economic and environmental performance.

Included in the 2013 CSR Report are the subjects that Enbridge, based on stakeholder feedback and input, believes to be most material to its stakeholders, including key areas of safety and operational performance, emergency preparedness and response, energy and climate change, stakeholder engagement, Aboriginal and Native American engagement and economic impacts, among others. In addressing these subjects, the report identifies challenges and enhancements the Company made over the year. The report also includes sections on Enbridge's governance and compliance, and the recent investments it has made in innovation.

"Our approach to CSR is just as important as the other elements of strong performance at Enbridge," said Al Monaco, President and Chief Executive Officer, Enbridge Inc. "Ultimately, success in our business requires a deep understanding of concerns and a commitment to delivering results for a wide variety of stakeholders including our customers, landowners, employees, regulators, shareholders and the general public. Our stakeholders place their trust in us. Our strong focus on CSR actions, results and reporting gives them confidence that we are living up to their expectations, and provides them transparency into our efforts to continually strive for improvement in meeting our obligations to them."

"Enbridge's ORM plan illustrates our intense focus on achieving industry leadership in key elements of the business," said Mr. Monaco. "This includes not only achieving measureable improvements in the six key areas, but also cultivating and supporting a culture where we refuse to accept that any incident is inevitable or acceptable. The ORM plan further builds on our number one priority as a company – safety and operational reliability."

Enbridge's Annual Report provides a detailed overview of its financial and operating performance for the same year, and includes Consolidated Financial Statements and related Management's Discussion and Analysis (MD&A) for the year ended December 31, 2013. All of these documents, along with the Company's Annual Information Form (Canada) and Form 40-F (United States), are available at www.sedar.com (Canadian filings), www.sec.gov (U.S. filings), or www.enbridge.com/investorfilings.

Highlights from Enbridge's Annual Report have been mailed to all shareholders with a copy of the Management Information Circular and information relating to the Company's annual meeting of shareholders to be held May 7, 2014. A full copy of the report, including MD&A and financial statements is being distributed to those shareholders who have opted to receive it.

Printed copies of the Annual Report and the CSR Report will be available in both English and French on request. To request a copy of the report, call 1-800-481-2804 or email investor.relations@enbridge.com.

Enbridge is listed on the Global 100 Most Sustainable Corporations in the World, the Dow Jones Sustainability Index (North America and Word indices) and the CDP Global 500 Carbon Disclosure ranking.

About Enbridge Inc.
Enbridge Inc., a Canadian Company, is a North American leader in delivering energy and has been included on the Global 100 Most Sustainable Corporations in the World ranking for the past six years. As a transporter of energy, Enbridge operates, in Canada and the U.S., the world's longest crude oil and liquids transportation system. The Company also has a significant and growing involvement in natural gas gathering, transmission and midstream businesses, and an increasing involvement in power transmission. As a distributor of energy, Enbridge owns and operates Canada's largest natural gas distribution company, and provides distribution services in Ontario, Quebec, New Brunswick and New York State. As a generator of energy, Enbridge has interests in 1,800 megawatts of renewable and alternative energy generating capacity and is expanding its interests in wind and solar energy and geothermal. Enbridge employs more than 10,000 people, primarily in Canada and the U.S. and is ranked as one of Canada's Top 100 Employers for 2013. Enbridge's common shares trade on the Toronto and New York stock exchanges under the symbol ENB. For more information, visit www.enbridge.com. None of the information contained in, or connected to, Enbridge's website is incorporated in or otherwise part of this news release. 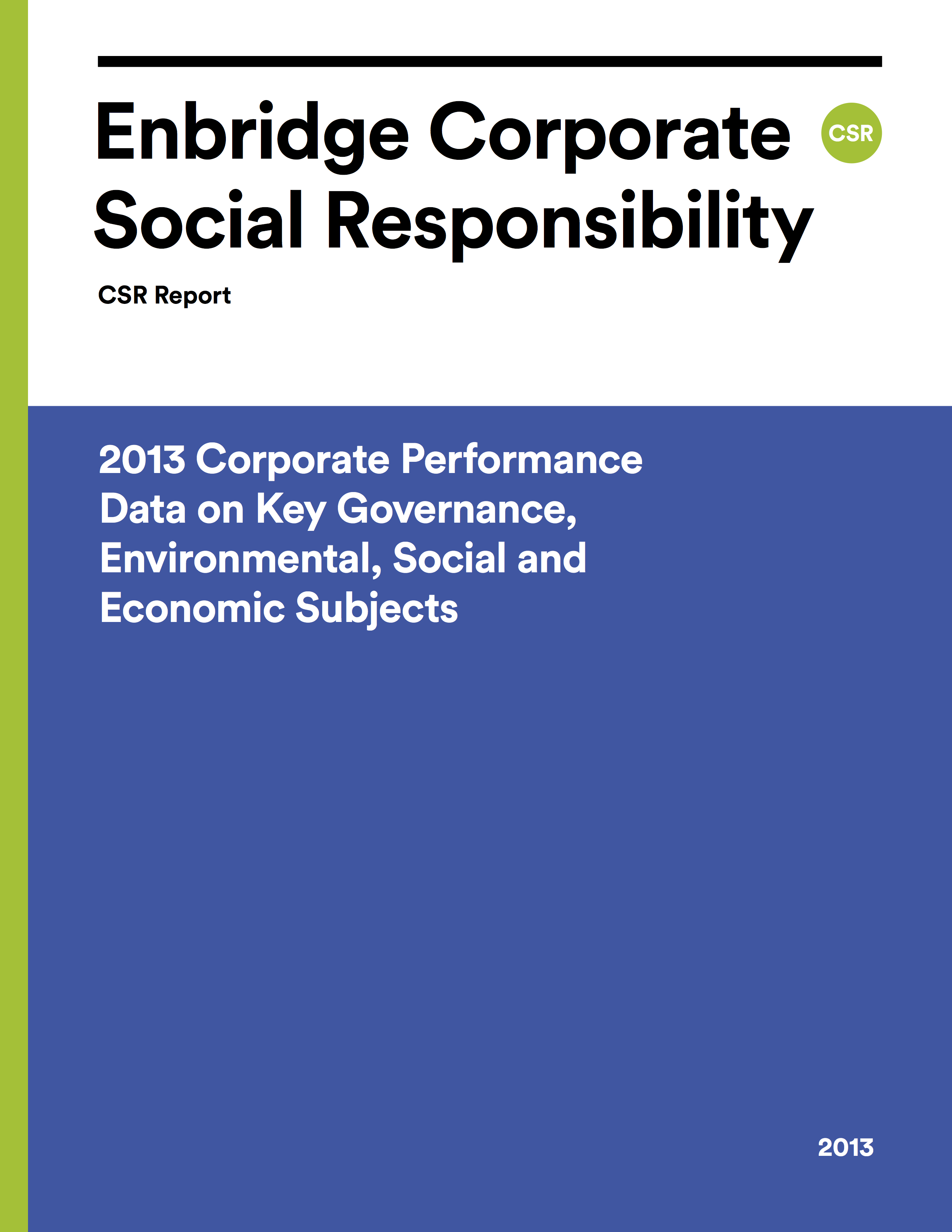