November 7, 2012 /3BL Media/ - Incite National Business Development Director Nick Cavarra will speak at the 6th Annual Behavior, Energy and Climate Change conference presenting “Engagement Marketing – Tactics Beyond Traditional Mass Media Reach and Frequency.” The session will be a part of the New Marketing Tactics session on Wednesday, November 14th at 10:30am PST and is described as:

The difference between traditional media advertising and “Engagement Marketing”

Traditional marketing campaigns deploy utilizing various media channels such as TV, radio, online and outdoor, relying only on the audience reach of those mediums. While traditional reach and frequency are important, they are only the first piece of a larger plan to engage and elicit true behavior change with target audiences. Engagement marketing employs the use of traditional tactics to educate target audiences about an issue (raise awareness), and then integrates engagement tactics (events, social media interaction, blogs, websites, interactive emails, rich media, etc.) to ensure the audience is actually participating in the new behaviors being promoted.

"We are thrilled to return to the BECC conference this year and present," Cavarra said when asked about the conference breakout session. "We're eager to share our knowledge and experience leveraging the power of media and our deep audience relationships with our media brands to engage, inspire and incite positive change in our audience's lives and communities."

With over 25 years of experience in the marketing and entertainment industries, Nick Cavarra leads the new business strategy and outreach for the Incite portfolio with an emphasis on behavior change marketing campaigns for state and municipal entities throughout the nation. His has worked on water conservation campaigns with the Lower Colorado River Authority, Metropolitan Water District and the California Department of Water Resources, as well as energy conservation campaigns for Flex Your Power in California.  He has developed campaigns to improve children’s education and nutrition (First 5 California); emergency preparedness (Office of the Los Angeles Mayor – Homeland Security Department), campaigns to discourage bullying and gang violence (Los Angeles Human Relations Commission Zerohour Program), as well as social media campaigns for education leaders (UCLA Extension).  No stranger to production in radio, Nick launched and produced the business talk radio show 2MinutesWith (now Unfinished Business) with co-hosts Renee Fraser and Betsy Berkhemer currently airing on KFWB News Talk 980 in Los Angeles.

Nick has spoken at many conferences as an expert in Behavior Change and Social Impact Marketing including the 2012 San Diego Cause Marketing Conference and the 2011 PIRATES Nonprofit Cause Marketing Seminar. He is a 2011 Fellow of the Leadership LA program through the Southern California Leadership Network and is an active member of the Los Angeles Area Chamber of Commerce. He is a veteran of the 82nd Airborne Division, earning multiple letters of accommodation, completing 32 parachute jumps, and was honorably discharged after serving from 1983-1986. He attended the USC School of Cinema and Television, with a BFA in Theater Arts.

About the Behavior, Energy and Climate Change Conference (BECC)

Now in its sixth year – BECC is the premier event focused on understanding individual and organizational behavior and decision-making related to energy usage, greenhouse gas emissions, climate change, and sustainability. BECC 2012 will build on the overwhelming success of previous BECC conferences, at which 700 participants discussed innovative policy and program strategies, shared important research findings, and engaged in building dynamic new networks and collaborations.

The BECC Conference is convened by the California Institute for Energy and Environment (CIEE), University of California, and the Precourt Energy Efficiency Center (PEEC), Stanford University, and American Council for an Energy Efficient Economy (ACEEE). 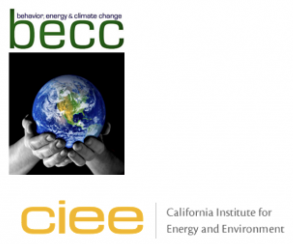