Leading Caribbean Airline Plans to Operate Flights to , Camagüey and Holguín from - (a)

JetBlue tentatively plans to operate once daily service between Fort Lauderdale-Hollywood and the following destinations (a):

The DOT is still considering applications for routes to Havana.

“Today’s news is historic on many fronts, especially for the families who, for the first time in generations, will have affordable award-winning air travel to visit their loved ones,” said Robin Hayes, president and chief executive officer, JetBlue. “We have been entrusted to put our mission of inspiring humanity to work. We are committed to providing those traveling to and from Cuba with the best customer experience – from the minute they book a flight until they arrive back home.”

The three cities announced today cover diverse regions of Cuba – “the authentic island” – and offer travelers access to a variety of destinations and activities. Camagüey and Holguín are each home to approximately 300,000 people and boast Colonial architecture, parks and plazas. Santa Clara, centrally located and home to more than 200,000 people, offers a rich history and is home to one of the most respected universities in Cuba.

Since starting charter flights to Cuba in 2011, the airline has gained valuable operational experience in the island nation and established itself as a trusted, quality carrier with a focus on the customer travel experience. As its presence grows in Cuba, the airline remains committed to supporting local Cuban culture and communities, as well as promoting sustainability initiatives that protect Cuba’s vast and rich natural resources and coastline.

JetBlue’s presence in Cuba will complement its major Caribbean and Latin America footprint. With more than 120 average daily flights to the region, JetBlue has positioned itself as one of the leading airlines in the region. JetBlue is also the largest carrier in Fort Lauderdale-Hollywood offering flights to nearly 50 nonstop destinations. Customers on the newly announced routes will benefit whether traveling from South Florida or connecting to or from other JetBlue cities.

“Visitors to Cuba will be very excited that they will soon be able to fly nonstop from Fort Lauderdale-Hollywood International Airport,” said Mark Gale, CEO/Director of Aviation for the Broward County Aviation Department. “Our easily accessible airport combined with JetBlue's low fares and renowned customer service are a great combination for travelers to Cuba.”

Flights between the U.S. and Santa Clara, Camagüey and Holguín will be operated on JetBlue's Airbus A320 aircraft offering the airline’s award-winning service, featuring the most legroom in coach (b); free Fly-Fi, the fastest broadband internet in the sky (c); complimentary and unlimited name-brand snacks and soft drinks; free, live DIRECTV® programming and 100 channels of SiriusXM® radio in every seatback.

Seats for the new flights will go on sale this summer. The restoration of commercial service gives customers the ability to book travel to and from Cuba with ease and convenience directly through JetBlue.

All customers traveling to Cuba must be authorized to do so under the U.S. government’s Cuban Assets Control Regulations and they must certify that they qualify for one of the twelve approved travel categories outlined by the U.S. Department of Treasury. All travelers to Cuba should also contact the Cuban Embassy in Washington to determine the appropriate type of visa required by Cuba for their purpose of travel.

Additional information on traveling to Cuba will be posted at jetblue.com/flights/cuba as it is available.

The routes tentatively awarded to JetBlue are part of the airline’s broader commercial services application submitted to the U.S. Department of Transportation in March, which also included flight frequencies to Havana. The agency has not yet awarded Havana frequencies. JetBlue’s focus cities make it uniquely situated to provide scheduled service between the U.S. and the Cuban capital. Fort Lauderdale-Hollywood and New York City are two of the three largest and most important markets for Cuba air service because of their large Cuban populations and associated familial, cultural and financial travel links.

(a) Subject to receipt of government operating authority.

(b) JetBlue offers the most legroom in coach, based on average fleet-wide seat pitch for U.S. airlines. 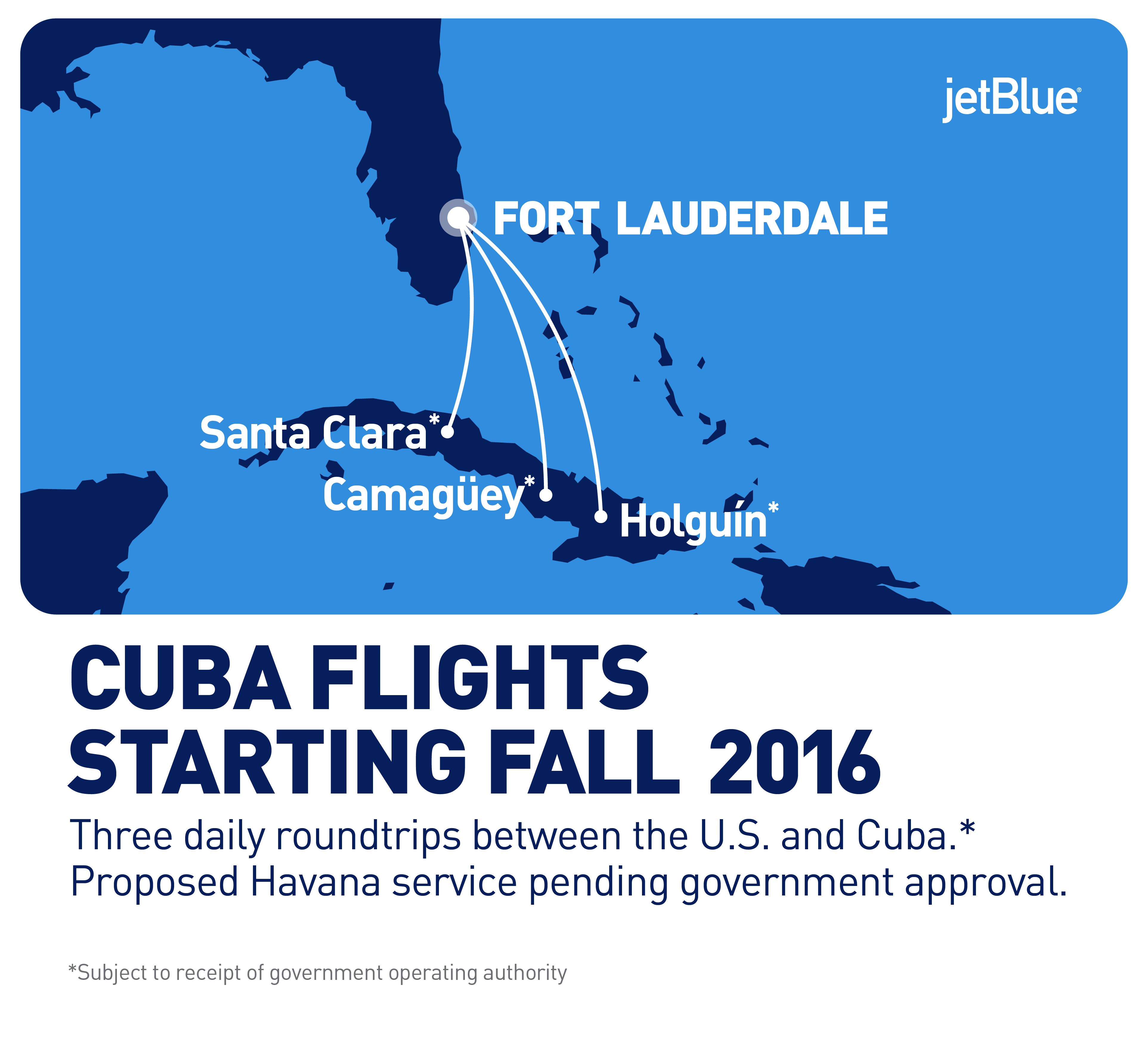