LAS VEGAS, June 22, 2015 /3BL Media/ – MGM Resorts International (NYSE: MGM) has been named one of America’s most reputable companies in the hospitality and travel industry, according to findings of research by Reputation Institute, a leading global source on corporate reputation.

“Reputable hospitality companies recognize that even though products and services are important and constitute 20 percent of what drives their reputation, whether they are responsibly run companies that are perceived as fair and transparent drives 15 percent of their reputation,” says Brad Hecht, Chief Research Officer at Reputation Institute.

The list of America’s top 50 most reputable companies in hospitality and travel is derived from data collected for the 2015 US RepTrak® 100 study, an annual survey that examines perceptions of companies by the U.S. general public and is based on more than 50,000 interviews.

“We are delighted to be named to this list among other leading U.S. brands that are recognized by their guests, customers and the general public for not only offering world-class experiences, but also strong leadership in governance, social responsibility and other areas establishing trust and excellence,” said Jim Murren, Chairman and CEO of MGM Resorts International.

The full list of America’s top 50 most reputable companies in the hospitality and travel industry can be found online at http://www.reputationinstitute.com/US-Hospitality-Reptrak.

MGM Resorts International (NYSE: MGM) is one of the world's leading global hospitality companies, operating a portfolio of destination resort brands including Bellagio, MGM Grand, Mandalay Bay and The Mirage. The Company is in the process of developing MGM National Harbor in Maryland and MGM Springfield in Massachusetts.  The Company also owns 51 percent of MGM China Holdings Limited, which owns the MGM Macau resort and casino and developing a gaming resort in Cotai, and 50 percent of CityCenter in Las Vegas, which features Aria resort and casino. For more information about MGM Resorts International, visit the Company's website at www.mgmresorts.com.

Reputation Institute (RI) is the world’s leading research-based consulting and advisory firm for reputation. RI enables many of the world’s leading companies to make more confident business decisions that build and protect reputation capital, analyze risk and sustainability topics, and drive competitive advantage. RI’s most prominent management tool is the RepTrak® model for analyzing the reputations of companies and institutions — best known via the Global RepTrak® 100, the world’s largest and most comprehensive study of corporate reputations, as well as Country RepTrak® and City RepTrak® studies that look at reputation across organizations within a given geography. 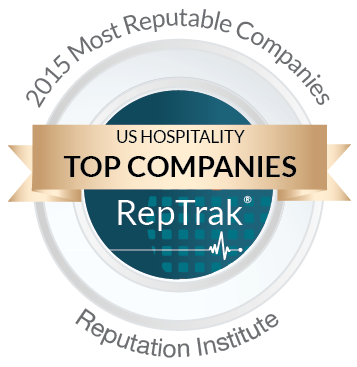