TORRANCE, Calif., February 9, 2015 /3BL Media/ – Toyota has been named one of world’s 50 Most Innovative Companies for 2015 by Fast Company magazine, recognizing the company’s leadership in the development and introduction of hydrogen fuel cell vehicles. As Fast Company writes, “Toyota plans to do for fuel cells what its Prius did for hybrids: make them ubiquitous and top of mind for environmentally conscious consumers.” The Toyota Mirai is the world’s first mass-market hydrogen fuel cell vehicle.  Already on sale in Japan, the Mirai will hit  U.S. roads in the fall of 2015.  A four-door, mid-size sedan, it offers performance that fully competes with traditional internal combustion engines – but it uses no gasoline and emits nothing but water vapor. The groundbreaking fuel cell electric vehicle refuels in about five minutes and travels up to 300 miles on a full tank. Fast Company also named Toyota as one of the most innovative companies in the auto sector, writing: “While other automakers are experimenting with fuel cells as niche vehicles, Toyota is the only one to engineer a global release, making all of its fuel-cell components in house.” The full story appears in the magazine’s March 2015 issue, available now on Fast Company’s website and on newsstands February 17.

About ToyotaToyota (NYSE:TM), the world's top automaker and creator of the Prius, is committed to building vehicles for the way people live through our Toyota, Lexus and Scion brands. Over the past 50 years, we’ve built more than 25 million cars and trucks in North America, where we operate 14 manufacturing plants and directly employ more than 40,000 people. Our 1,800 North American dealerships sold more than 2.5 million cars and trucks in 2013 – and about 80 percent of all Toyota vehicles sold over the past 20 years are still on the road today. Toyota partners with philanthropic organizations across the country, with a focus on education, safety and the environment. As part of this commitment, we share the company’s extensive know-how garnered from building great cars and trucks to help community organizations and other nonprofits expand their ability to do good. For more information about Toyota, visit www.toyotanewsroom.com. 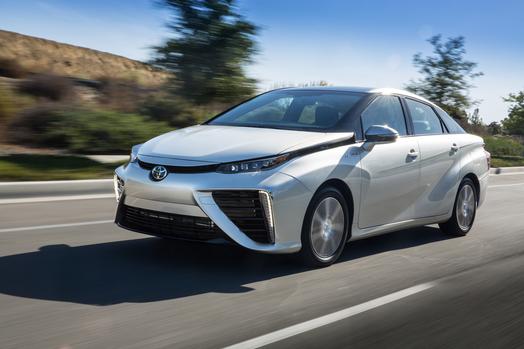