Mirai Takes the Stage at the National Mall

TORRANCE, Calif., April 14, 2015 /3BL Media/ – Fifteen years ago, a little hybrid no one knew rolled onto the National Mall to celebrate Earth Day. That hybrid – the Toyota Prius. Tomorrow, nearing the 45thanniversary of Earth Day, Toyota will return to Washington, D.C., to showcase yet another revolutionary technology, the hydrogen fuel cell electric Toyota Mirai. Toyota has partnered with Earth Day Network to sponsor the Global Citizen 2015 Earth Day celebration, April 17-19, featuring leading environmental voices, government leaders, star-studded performances and a Mirai activation. The celebration marks the beginning of a month of fuel cell features and festivities for Toyota."The Toyota Mirai represents a turning point in automotive history,” said Bob Carter, senior vice president, automotive operations, Toyota Motor Sales, U.S.A., Inc. “After more than 20 years of research and development, we are excited to bring Mirai to American driveways. Earth Day 2015 is a great platform to educate the public about hydrogen fuel cell technology and the potential of hydrogen as a future fuel.” For many Earth Day celebration attendees, this will be the first up close and personal look at the Mirai. The vehicle combines hydrogen and oxygen to create electricity that powers the electric motor. Water vapor is the only emission. The Mirai will go on sale in California later this year."Toyota has been a committed partner in creating solutions and momentum for a cleaner, better planet," said Kathleen Rogers, president of Earth Day Network. "We are proud to help educate about the possibilities for fuel cell technology and advocate around a shared vision for the environment.”Beyond the celebration on the National Mall, Toyota will use the month of April to engage and educate customers about fuel cell technology and hydrogen power, including events in New York and Los Angeles, and digital activities to converse with skeptics and advocates alike.

The zero emission Toyota Mirai is a four-door, mid-size sedan with performance similar to traditional internal combustion engines – re-fueling in about five minutes and traveling up to 300 miles on a full tank. For more information about the Toyota’s commitment to fuel cell technology, visit www.toyota.com/fuelcell.

About ToyotaToyota (NYSE:TM), the world's top automaker and creator of the Prius, is committed to building vehicles for the way people live through our Toyota, Lexus and Scion brands. Over the past 50 years, we’ve built more than 25 million cars and trucks in North America, where we operate 14 manufacturing plants and directly employ more than 40,000 people. Our 1,800 North American dealerships sold more than 2.5 million cars and trucks in 2013 – and about 80 percent of all Toyota vehicles sold over the past 20 years are still on the road today. Toyota partners with philanthropic organizations across the country, with a focus on education, safety and the environment. As part of this commitment, we share the company’s extensive know-how garnered from building great cars and trucks to help community organizations and other nonprofits expand their ability to do good. For more information about Toyota, visit www.toyotanewsroom.com. 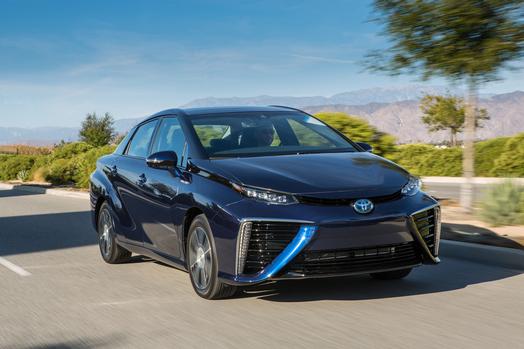