New York, April 6, 2015 /3BL Media/ -- In addition to a wide range of celebrity appearances and musical performances, the New York International Auto Show’s Opening Day ceremony included a brand new vehicle donation to an Afghanistan War hero who was injured in combat. Toyota and the Auto Show are joining forces with the Wounded Warrior Project, a national organization designed to provide help and raise public awareness for injured service members.  Toyota is donating a 2015 Toyota RAV4 Limited to United States Army Staff Sergeant Alfredo Delossantos of Fishkill, NY.  Delossantos was injured in 2008, and as a result of his injury, is an above-the-knee amputee.  The presentation took place during the opening ceremony of the New York Auto Show on Saturday, April 4 at 9.00 a.m. at the Jacob K. Javits Convention Center.  The keys of the new Toyota will be handed over to Delossantos by another war hero, Justin Constantine.  Constantine, a veteran of the United States Marine Corps, serves on the Board of Directors of the Wounded Warrior Project and is a Senior Advisor for Toyota’s Hiring Our Heroes program.

“We at Toyota are proud to provide this new, specially-modified RAV4 to Staff Sergeant Delossantos,” said Chris Shultz, General Manager of Toyota’s NY Region.  “We are thankful for the service and sacrifice of veterans like him.” “It is a great honor to work with Wounded Warriors and to provide Alfredo and his family with a new vehicle,” said Bob Vail, chairman of the Greater New York Automobile Dealers Association.  “Veterans like him put their lives on the line every day for us, and we are truly grateful.”  In October 2008, while serving in Afghanistan, Delossantos was wounded in action when his vehicle received RPG (rocket-propelled grenade) fire. As a consequence of the injury, he had an above- the-knee amputation of his right leg and experienced traumatic brain injury (TBI).  Delossantos, who still receives therapy for his injuries, recently picked up competitive handcycling to help rebuild strength and endurance.  He now races competitively, nationally and internationally, to improve his quality of life. The Bussani Mobility Team graciously modified the Toyota RAV4 to specifically meet Staff Sergeant Delossantos’ needs and provide him the autonomy that he enjoyed prior to his injuries. Celebrities, Pageant Winners, and a World-renowned Band Join the Fun!Prior to the vehicle presentation, the New York Auto Show’s Opening Day festivities include an indoor parade of the Show’s hottest vehicles and appearances by: 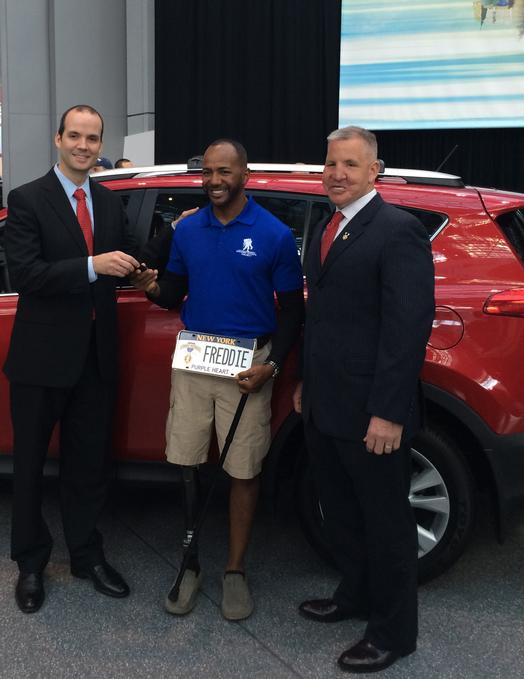