UPPER MARLBORO, Md., February 19, 2014 /3BL Media/ - President Obama on Tuesday ordered the development of tough new fuel standards for the nation’s fleet of heavy-duty trucks as part of what aides say will be an increasingly muscular and unilateral campaign to tackle climate change through the use of the president’s executive power.

The new regulations, to be drafted by the Environmental Protection Agency and the Transportation Department by March 2015 and completed a year later so they are in place before Mr. Obama leaves office, are the latest in a series of actions intended to cut back on greenhouse gases without the sort of comprehensive legislation the president failed to push through Congress in his first term.

The limits on greenhouse gas pollution from trucks would combine with previous rules requiring passenger cars and light trucks to burn fuel more efficiently and pending rules to limit the carbon emissions of power plants. Cumulatively, experts said the à la carte approach should enable Mr. Obama to meet his target of cutting carbon pollution in the United States by 17 percent from 2005 levels by 2020. But they said he would still be far short of his goal of an 80 percent reduction by 2050.

“Improving gas mileage for these trucks is going to drive down our oil imports even further,” Mr. Obama said at a Safeway grocery distribution center here, flanked by a Peterbilt truck and Safeway and Coca-Cola cabs. “That reduces carbon pollution even more, cuts down on businesses’ fuel costs, which should pay off in lower prices for consumers. So it’s not just a win-win, it’s a win-win-win. We got three wins.”

Not everyone sees it that way. United States car and truck manufacturers have lobbied heavily against aggressive increases in federal fuel economy standards, saying that they could increase vehicle prices and diminish safety. More broadly, Republicans have said that the president should not single-handedly impose what they consider onerous requirements on vast swaths of the energy economy when Congress has opted against its own intervention.

The announcement was part of the president’s vow in his State of the Union address last month to advance his agenda “with or without Congress.” But while most of the actions taken since then have been relatively modest, like ordering a study of job training programs, one area where Mr. Obama both has the power to take more sweeping action and seems intent on using it is the environment.

In the case of carbon pollution, Mr. Obama has the legal authority under the 1970 Clean Air Act, which requires the Environmental Protection Agency to regulate any substance designated as a pollutant that harms or endangers human health. In 2009, the E.P.A. determined that carbon dioxide, emitted in large quantities from tailpipes and smokestacks, meets that definition.

While Mr. Obama effectively gave up on comprehensive climate legislation after it stalled in the Senate in his first term, aides said he saw climate change as an area where he could still shape his legacy. He recruited John D. Podesta, a former White House chief of staff for President Bill Clinton, to join his team as counselor in part to direct a more aggressive approach to the issue.

These accompany more assertive actions the administration is taking to reshape the American energy sector. In August the E.P.A. issued rules requiring automakers to double average fleet economy standards for passenger cars to 50.4 miles per gallon by 2025, which the administration said would cut carbon pollution from vehicles in half.

In September the E.P.A. proposed new rules cutting carbon pollution from future coal-fired power plants, a move that has effectively frozen construction of new coal plants. Mr. Obama has directed the E.P.A. to produce by June a draft regulation targeting existing coal plants, a deeply controversial move that could shutter hundreds of facilities.

“They have to do the actions at home to show the rest of the international community that they’re doing the actions they need the rest of the world to do,” said Durwood Zaelke, president of the Institute for Governance and Sustainable Development, a Washington research organization.

But environmental advocates warn that the E.P.A. rules will be effective only if they withstand legal and legislative efforts to undo them, which is why they want Mr. Obama to be more energetic about selling them to the public. “If you make a push purely on the executive action front and you don’t back it up with measures to bolster public support, a lot of this can crumble under a new administration,” said Michael Levi, a climate change expert at the Council on Foreign Relations.

Specialists like Mr. Levi also note that no matter what the United States does on its own, it may not matter if Washington fails to persuade other nations, like China and India, to commit to similar actions, which is Mr. Kerry’s assignment.

In his speech here Tuesday, Mr. Obama said that heavy-duty trucks represent just 4 percent of all vehicles on American highways but generate 20 percent of the carbon pollution produced by the transportation sector.

Environmentalists applauded Mr. Obama’s move. Michelle Robinson, director of the clean vehicles program at the Union of Concerned Scientists, said improving fuel efficiency of heavy-duty trucks could reduce oil consumption by as much as one million barrels a day in 2035, more than the capacity of the proposed Keystone XL pipeline.

A coalition of shippers that stand to benefit from lower fuel costs, including FedEx, Wabash National Corporation and Waste Management Inc., welcomed the president’s action and released its own suggestions to shape the administration’s new regulations.

“This collaborative approach will result in realistic, achievable goals and an effective regulatory framework to improve fuel efficiency and reduce greenhouse gas emissions,” said Douglas W. Stotlar, president of Con-way Inc., the nation’s third-largest freight company and a member of the coalition.

The American Trucking Association took a more cautious view, saying that it had worked with the administration on previous rules. “As we begin this new round of standards, A.T.A. hopes the administration will set forth a path that is both based on the best science and research available and economically achievable,” said Bill Graves, the association’s chief executive.

Mr. Obama pointed to what he called an emerging consensus. “If rivals like PepsiCo and Coca-Cola or U.P.S. and FedEx or AT&T and Verizon, if they can join together on this, then maybe Democrats and Republicans can do the same,” he said. 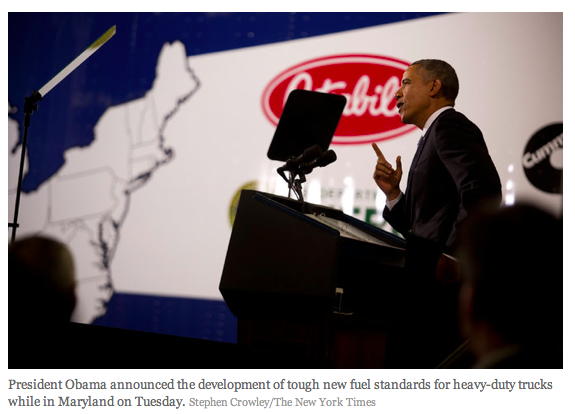