Nov. 24, 2015 /3BL Media/ - With key international climate negotiations one week away, the chief executive officers of Coca-Cola, The Hain Celestial Group Inc., Hershey’s and PepsiCo announce today that they’ve joined with ten of their peers in signing a joint letter to U.S. and world leaders urging governments to forge a robust international climate agreement in Paris.

“As world leaders convene in Paris you will have an opportunity to take action on climate change that could significantly change our world for the better,” states the letter, which also cites the growing impacts of drought, flooding and hotter growing conditions on the world’s food supply.

“Increasingly more companies, even long-standing competitors, are uniting at this pivotal moment to urge our political leaders to act swiftly and decisively on global warming, ” said Mindy Lubber, President of Ceres. “These businesses see both climate impacts in their supply chains and the long-term financial benefits of GHG-reducing efforts, and are stepping forward with their own carbon cutting plans.”

The CEO signatories pledge to boost their companies’ sustainability efforts, to advocate achievable, enforceable science-based carbon reduction targets, and to share their best practices to encourage other companies to join their effort.

"Combatting climate change is not simply about the environment. Promoting clean energy and conserving natural resources today will help create the thriving companies and societies of tomorrow,” said Indra Nooyi, PepsiCo Chairman and CEO. “We are deeply committed to reducing PepsiCo's environmental footprint and have made significant progress in the last decade. Sustainable agriculture, water stewardship and energy efficiency are pillars of PepsiCo’s long-term growth strategy and we are expanding our efforts around the world."

PepsiCo will be hosting and participating in several business forums during the COP21 conference, with a particular focus on sustainable agriculture. PepsiCo additionally signed the White House climate pledge, committing to: expanding the use of sustainable farming practices to 500,000 acres of farmland used by its North American agricultural suppliers in its corn, oats, potato, and citrus supply chains by the end of 2016; phasing out use of HFC in all equipment by 2020; and zero deforestation in its business operations and global supply chain by 2020.  For more information on Pepsico’s efforts to reduce its environmental impact, see www.pepsico.com/Purpose/Environmental-Sustainability and howwillwe.com.

“At Coca-Cola, we are deeply committed to doing our part to address our collective environmental challenges and responsibly manage the planet’s resources,” said Muhtar Kent, Chairman and Chief Executive Officer, The Coca-Cola Company. “As we face a resource-stressed world with growing global demands on food and water, we must seek solutions that drive mutual benefit for business, communities and nature. Companies who successfully balance social, environmental and economic values will be sustainably successful in the 21st century."

Through the White House climate pledge, Hershey’s committed to reduce its emissions to 50 percent of its 2009 levels by 2025 and to trace 100 percent of its palm oil purchases, to the mill level by 2015 and to the plantation level by 2016, to ensure the palm oil it purchases is deforestation-free and sustainably sourced.

The joint letter to U.S. and world leaders is the first time these businesses have publicly united on the need for a strong global climate deal at the 21st Conference of Parties to the United Nations Framework Convention on Climate Change, also known as “COP21.”  Governments of more than 190 nations will meet in Paris this December at COP21 to discuss a possible new global agreement on climate change aimed at keeping global warming below the 2°C threshold.

The most recent reports by the Intergovernmental Panel on Climate Change (IPCC) show that climate change is already cutting into global food supplies and is contributing to price spikes and social unrest in various regions of the world. The rate of increase in crop yields is slowing, especially for wheat, which is sensitive to changes in heat. By 2030 negative impacts are expected across a wide spectrum of crops in both arid and non-arid regions. Changes in temperature and rainfall patterns could lead to food price rises of between 3% and 84% by 2050, according to the IPCC. 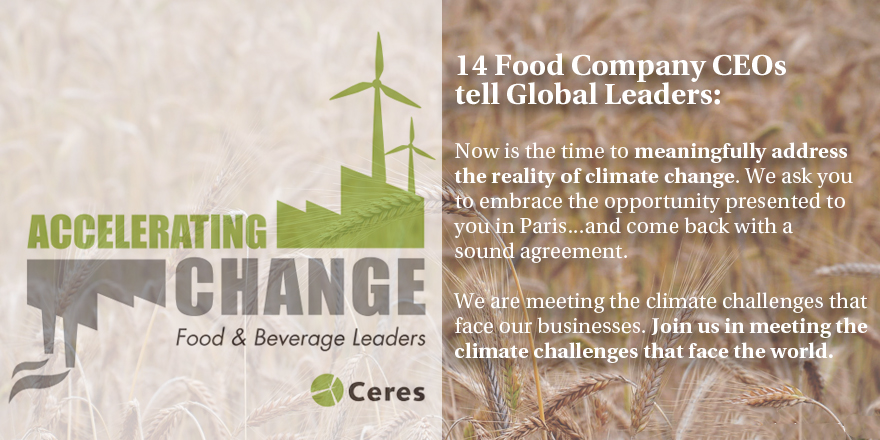 Ceres Accelerator Commends U.S. Federal Reserve for Affirming Climate Change As a Risk to Financial Stability
Nov 11, 2020 9:05 AM ET
State Treasurer, Investors With More Than $102 Billion in Assets Call on New Mexico Regulators to Strengthen Draft Ozone and Methane Regulations
Nov 10, 2020 12:15 PM ET
Biden-Harris Victory Is a Win for Our Health, Planet, Our Economy and Our Future
Nov 9, 2020 8:00 AM ET
As Election Looms, the Trump Administration's Formal Withdrawal of the U.S. From the Global Paris Agreement Goes Into Effect
Nov 4, 2020 11:10 AM ET
Major US Investors Call on Largest Corporate Emitters to Disclose How Their Climate Lobbying Aligns With Climate Science
Oct 26, 2020 10:50 AM ET