BENTONVILLE, Ark., April 20, 2017 /3BL Media/ – Walmart today released its tenth annual Global Responsibility Report, which looks back at the company’s progress during fiscal year 2017 in advancing the key areas of opportunity, sustainability and local communities. The report also looks ahead at the retailer’s role in helping rewire whole social and environmental systems as it strives toward a new era of trust and transparency.

“At Walmart, we aim to use our strengths and collaborate with others to transform the systems we all rely on,” said Kathleen McLaughlin, chief sustainability officer and president of the Walmart Foundation. “We believe that the value-maximizing strategy is the one that creates shared value for customers, business and society.”

The three aspirational goals Walmart set in 2005 remain constant to this day while the company’s approach and vision of global responsibility continue to evolve. This past November, the retailer announced a new approach in advancing the key areas of opportunity, sustainability and community which consists of a 10-year vision to create shared value and underscores the importance of true integration into the company’s core business.

Notable milestones and progress from the 2017 Global Responsibility Report include:

Enhancing the Sustainability of Operations and Our Value Chain

* Based on review of material handling and waste diversion processes in Argentina, Brazil, Canada, Central America, Chile, Japan, Mexico, South Africa, U.K., and U.S., as reported by waste vendors, food banks and stores. In cases where real numbers were not available due to industry challenges they have been estimated based on industry acceptable standards.

About Walmart
Wal-Mart Stores, Inc. (NYSE: WMT) helps people around the world save money and live better - anytime and anywhere - in retail stores, online, and through their mobile devices. Each week, over 260 million customers and members visit our 11,695 stores under 59 banners in 28 countries and e-commerce websites in 11 countries. With fiscal year 2017 revenue of $485.9 billion, Walmart employs approximately 2.3 million associates worldwide. Walmart continues to be a leader in sustainability, corporate philanthropy and employment opportunity. Additional information about Walmart can be found by visiting http://corporate.walmart.com on Facebook at http://facebook.com/walmart and on Twitter at http://twitter.com/walmart. 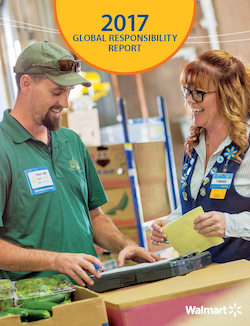