LEADER Starts to Pay Off

From that small start, NS has transformed LEADER into the railroad’s flagship fuel-efficiency initiative.

In mid-2013, NS achieved a major milestone with its rollout: Every division on the network had the ability to run LEADER-equipped locomotives. By July of 2014, LEADER was installed on about 70 percent of NS road locomotives, and, by year’s end, all of NS’ approximately 7,000 locomotive engineers should be trained in using the technology, said Neville Wilson, director operations and locomotive control, who directs the LEADER initiative.

“We’re making progress,” Wilson said. “We have a sufficient number of locomotives equipped and engineers trained that we’re running LEADER engines across the entire network.”

The GPS-based software that powers LEADER – an acronym for Locomotive Engineer Assist/Display Event Recorder – processes operating conditions in real time as a train moves over the track. In the locomotive cab, a LEADER monitor prompts engineers on optimum throttle speed and dynamic braking to achieve maximum fuel economy.

Fuel savings vary based on train makeup, track profile, and speed, but, on average, NS trains led by LEADER-outfitted locomotives have been consuming approximately 5 percent less fuel on road trips. The operations and locomotive group estimates that LEADER in 2013 saved NS about 10 million gallons of diesel fuel. During that year, NS trains consumed more than 479 million gallons of diesel at a cost of around $1.4 billion. Reducing the railroad’s fuel bill, one of NS’ largest operating expenses, is a primary driver of the LEADER initiative, in addition to reducing greenhouse gas emissions and the environmental impacts associated with those emissions.

LEADER’s potential to cut operating costs and lower the company’s carbon footprint, Wilson said, are reasons why employees have a stake in the technology’s success.

Working with vendor and LEADER manufacturer New York Air Brake, NS continues to refine and improve the technology’s capabilities. The next significant development will be adding an automatic control feature, Wilson said. When installed, LEADER will have the capability to automatically adjust an engine’s throttle speed.

“That, in my opinion, is one of the most exciting features in the pipeline for LEADER,” Wilson said. “It will allow us to realize even greater benefits.”

While running locomotives in auto control, engineers would manage train operations but allow LEADER to control the train throttle and dynamic braking. If needed, LEADER would coach engineers through air brake applications. Eventually, NS plans to seamlessly integrate LEADER into Positive Train Control, a step that would expand auto control capabilities to include signal recognition.

NS piloted the auto control feature on a couple of business lanes in the fall. The aim, he said, is to begin installing the upgrade on LEADER-outfitted locomotives as early as the fourth quarter of 2014.

Read the third article: Engineer Uses LEADER to do his Job Better 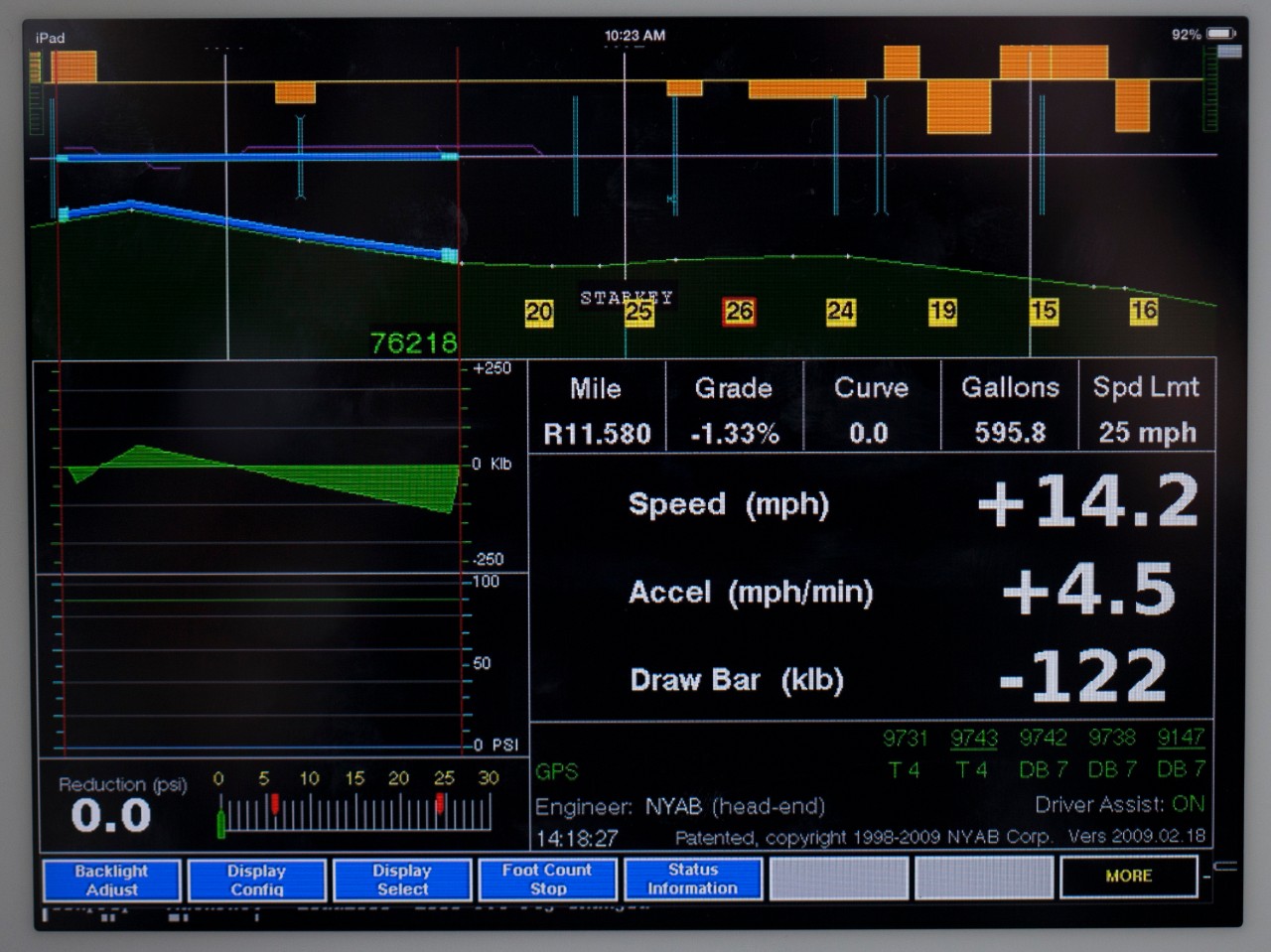