National Grid: Daylight Savings | No One Left in the Dark

It’s nearly that time of year again—time to “fall back” and look forward to an extra hour of sleep. This Sunday, November 6th, at 2 a.m., Daylight Saving Time ends for most Americans. For those of us in the business of renewable energy, whether it be from the utility perspective, or from the kitchen table of a home outfitted with residential solar—the loss of an hour of sunlight is something taken into consideration when planning for energy needs.

Harnessing the sun to generate clean, homegrown electricity is brilliant. We know it is an important piece of a balanced energy portfolio. But after conversations with customers and other stakeholders, it has become clear to me that it must be mutually beneficial. For instance, it must always be affordable and accessible to all.

A decade ago, the solar energy industry in the northeast was in its infancy. Building solar installations and getting them connected to a local utility was cost-prohibitive. In an effort to support this clean technology while achieving the goal of slashing greenhouse gas emissions, policymakers set out to implement incentives that would make solar economically feasible. In Massachusetts and New York, for example, solar gained popularity quickly, creating jobs and giving birth to a robust industry. It worked.

We’ve connected hundreds of megawatts of customer-owned solar to our networks in the states we serve. In fact, National Grid in Massachusetts was named one of the top five utilities connecting the most megawatts of solar energy in the United States. In New York, we’ve seen a five-fold increase in large-scale solar project applications. To keep pace with this increasing demand, we have more than doubled the size of our renewable energy teams to get these projects online.

Here we are, years later, with a fairly mature solar industry. The actual costs of building an installation have drastically decreased, and more residents, businesses and communities are jumping at the opportunity. Despite this growth and maturation, in some states solar is still receiving those same lucrative subsidies. At the same time, solar owners and developers don’t pay for the distribution system they use to sell power into the grid or get electricity back when it’s dark or cloudy, leaving non-solar customers to pick up the whole bill.

To be clear, this state of affairs does not affect our bottom line as a utility – all the costs of purchasing electricity and maintaining the grid are, by law, collected through the rates customers pay on their bill.

But it does affect the bottom lines for the vast majority of our customers who do not or cannot own solar. In Massachusetts, for example, subsidies for solar energy, including net metering, renewable energy credits, and use of the grid, add up to millions of dollars in bill increases each year– totaling $3.5 billion by 2025.

Those numbers just won’t work when the primary prerequisite of our energy transition is affordability. That’s why we have encouraged policymakers across our U.S. footprint to adopt policies that are more fair and sustainable in the long term for all families and communities.

How do we ensure continued solar growth without further burdening our customers?

Focusing on energy costs does not mean losing sight of a decarbonized future that includes solar. Just the opposite: creating a sustainable system today will enable renewable energy to truly flourish tomorrow.

That’s why we’re also taking the lead on innovating ways to make interconnections easier and more affordable. To maximize the benefits to our customers, we are building large-scale solar, owned by National Grid and strategically located near centers of high demand. We have positioned these solar installations southwest – rather than the traditional “due south” – to maximize the value of the sun’s rays for customers later in the day, when the demand on the system is highest.

We are also testing the method of “neighborhood solar” in Buffalo’s Fruit Belt as part of New York’s Reforming the Energy Vision (REV). This project will install solar panels on the roofs of 100 suitable homes in the neighborhood and sell the power to the state’s electricity market. The proceeds from those electricity sales will then go back to those 100 customers to reduce their electric bills, plus an additional 50 additional households that applied for the program. The idea behind the project is to see if neighborhood solar could be an economically viable way of spreading renewable energy to lower-income areas. If successful, the hope is that more businesses, ranging from utilities to energy services companies, would use the same model in other underserved communities.

This demonstration will determine the best ways to increase solar penetration and energy efficiency adoption in communities that could potentially be underserved.

National Grid is committed to achieving the benefits of solar for the lowest possible cost. This journey to a clean, reliable and affordable energy future must be accessible for all of our customers.

To ignore the issues of affordability and accessibility would leave us with a future of renewable energy that divides customers between the haves and the have-nots. We refuse to leave so many customers behind in our pursuit of a clean energy future but instead continue to support a long-term sustainable solution for all. 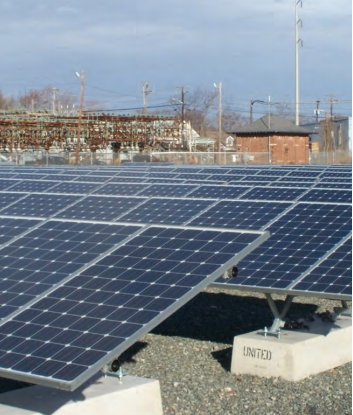