The following article is taken from the “The New Buffalo” chapter of Dean Seavers’ Democratization of Energy eBook.

For many years, Buffalo, N.Y. was the symbol of Rust Belt economic decline in the northeast. A once-thriving industrial powerhouse, the city and region suffered through a decades-long slide that seemed to have no bottom.

Today, construction cranes dot the skyline. Long vacant buildings are being repurposed. Old industries have stabilized, and new industries are taking root. Troubled neighborhoods are seeing new investment. The previously desolate waterfront area is a beehive of activity, even in the dead of Buffalo’s infamous winters. In fact, since 2012, Western New York has seen more than $19 billion in development, more than half of it in the city of Buffalo.

I am proud to say that National Grid is quietly at the heart of it. We have an obligation to serve, of course, but through our Connect21 strategies, we’re trying to lead and not just follow. Under the old utility paradigm, developers would have made their plans, come to us for service, and then been forced to wait while we proceeded with engineering and, if necessary, installed new infrastructure to meet their needs.

For today’s Buffalo, that just won’t work. We need to be quicker and more flexible. To do so, we’ve taken an approach that gathers customer intelligence before the shovel hits the ground, integrating our planning with that of our customers. No better example exists than the burgeoning Buffalo Niagara Medical Campus (BNMC).

The BNMC is an economic engine unto itself. A collection of hospitals, life science research and educational facilities, medical offices, and even a hotel, it encompasses 120 acres just north of the downtown business district. It’s currently home to 500 doctors and 200 PhDs. When the current round of $200 million in construction is complete, more than 12,000 people will be working and learning there. The pace of growth has been remarkable and so has the demand for energy.

For a time, we struggled to keep up. Every new building, every renovation, every new computer put a strain on aging energy infrastructure that was already near capacity. We were at risk of being a barrier to progress. So, we found a better way. We became a part of the BNMC’s planning, giving us a view of where they were going, and where we needed to go to meet their needs.

The result? Together we developed a comprehensive energy strategy – energizeBNMC – that allows us to meet the campus energy needs today and tomorrow, and allows the campus to better manage its energy use and meet its goals of development and sustainability. We put money in the ground, adding electrical capacity in the Michigan Ave. corridor before it was actually needed. BNMC leadership, taking some risks, has invested in everything from electric vehicle charging stations to parking lot lighting that is powered by both wind and solar, completely off-grid with its own battery storage.

I need to emphasize how critically special this is. Historically, utilities DO NOT do this. But it’s a sign of change; we’re transitioning to a new way of doing business.

National Grid and the BNMC are bringing energy innovation to the surrounding neighborhood, as well. This area, known as the “Fruit Belt” with its Lemon, Peach, and Grape Streets, is an underserved corner of the city immediately east of the campus. But it’s on the cusp of a turn-around.

As part of New York’s Reforming the Energy Vision (REV) proceeding, we’re bringing the benefits of neighborhood rooftop solar to the Fruit Belt. Unlike traditional solar installations, which generate electricity only for one resident or business who can afford it, we’re aggregating the power from 100 neighborhood solar installations and sharing the benefits with residents who otherwise might not be in a position to install on their own.

It’s an exciting time in Buffalo and the region, and not just on the medical campus. You should hear about Larkinville, Canalside, Outerharbor – names being identified with the rebirth of a once and soon-to-be great city. Riverbend is the new site of the largest solar panel manufacturer in the Western Hemisphere, ground zero for the city’s burgeoning clean energy industry. These are stories for another day, but we’re excited to be a part of them all. 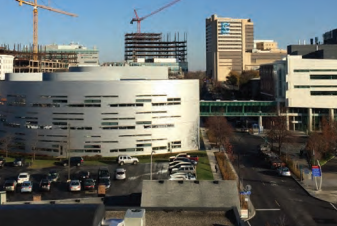