States that are Leading the Clean Energy Economy & Creating Jobs

At a time of notable acceleration in the nation’s transition to a clean energy economy, California leads all states in clean tech leadership for the seventh consecutive year, according to annual rankings released by Clean Edge, a leading clean tech research and advisory firm.

Based in Portland, Oregon, and the San Francisco Bay Area, Clean Edge annually benchmarks all 50 states and the 50 largest U.S. metro areas on dozens of metrics covering clean energy, clean transportation deployment, policy leadership, financial investments in the clean tech sector, and relevant human and intellectual capital. In the 2016 U.S. Clean Tech Leadership Index, California retained its seven-year hold on the #1 ranking in the Technology category, while swapping places with Massachusetts in the other two categories: Policy and Capital. The solar power capital of the U.S. in both industry presence and deployment, California generated more than 15,000 utility-scale Gwh (Gigawatt hours) and more than 5,000 distributed GWh of power from the sun in 2015, both the most in the nation by far.

California captured the best score in the Policy category for the first time, spearheaded by its aggressive RPS (Renewable Portfolio Standard) increase to 50 percent renewables by 2030 (from 33 percent in 2020, which the state’s investor-owned utilities say they are on track to meet). California ceded the top spot in Capital to its cross-country rival, Massachusetts; the two states have occupied the top two places in Capital in every edition of the Index back to 2010. All quantified indicators in the Clean Edge rankings are normalized for population.

But Vermont is arguably the big story of the top 10, making a three-place jump from the previous year to #3, an unprecedented surge at that level of the rankings. Vermont knocked Oregon down one spot to fourth, while New York held onto to the #5 ranking for the third straight year. The rest of the top 10 are closely bunched; just 5.4 points separate the sixth and tenth place states. Colorado dropped two places to sixth, while #7 Illinois and #8 Connecticut swapped places from 2015. Washington State (after three straight years of declining rankings) and Hawaii held steady at ninth and 10th, respectively. Just missing the top 10 were Maryland and Rhode Island, which each improved by five places to #11 and #12, respectively.

The 2016 Index results come at a time of notable acceleration in the nation’s transition to a clean energy economy, where an increasing number of cities, states, and companies are raising their renewable energy targets, green buildings are becoming the standard, and energy storage and EVs are moving into the mainstream.

At the state level, the transition to a clean energy economy over the past seven years has been remarkable. In 2015, 14 states exceeded 10 percent in-state generation from non-hydro renewables (up from just one state in 2010). The top three states (Iowa, South Dakota, and Kansas) were at 31 percent, 25 percent, and 24 percent respectively. And it’s not just wind generation – in this year’s Index, California became the first state to generate 10 percent of its in-state electricity from utility-scale and distributed solar, with Hawaii not far behind at 7 percent.

This dramatic shift (more than 60 percent of all new U.S. electricity generating capacity additions last year came from solar and wind) represents both the maturation of the clean-energy sector and a deployment landscape that seemingly transcends politics. Among the top 10 states for utility-scale clean electricity generation (not including hydro), half were red states during the last presidential election (Idaho, Kansas, North Dakota, Oklahoma, and South Dakota) and half were blue (California, Colorado, Iowa, Minnesota, and Vermont).

And it’s not just utility-scale renewables that pierce the myth of a red-blue divide when it comes to clean energy deployment. This year’s Top 10 states for EV – Electric Vehicle registrations (normalized for population) include three red states (Arizona, Georgia, and Utah) and two that are purple (swing) states in the current election cycle (Colorado and Nevada). For smart meter penetration, red states represent half of the Top 10 spots: Georgia (87 percent), Arizona (74 percent), Alabama (72 percent), Idaho (71 percent), and Texas (70 percent). In some indicators, such as LEED green building deployment, coastal and left-leaning states dominate the Top 10, while in others, such as demand response peak demand shaved, more red states lead.

California also dominates the 2016 Metro Clean Tech Leadership Index, with its largest cities capturing the top three places and four of the top six. The San Francisco Bay Area’s leadership continues into its fifth year: San Francisco and San Jose have finished in the top two for each year the Index has been run, with San Francisco leading the pack for the last four years. However, San Francisco’s lead has narrowed considerably, going from nearly 15 points in the 2014 Index to just 2.5 points in 2016. That being said, the two neighboring metros remain head and shoulders above the rest of the field, with #3 San Diego finishing more than 30 points behind San Jose.

Read Clint's complete article with full set of charts and graphs at- http://www.greenmoneyjournal.com/july-august-2016/california-massachusetts-vermont-lead-transition-to-clean-energy-economy/ 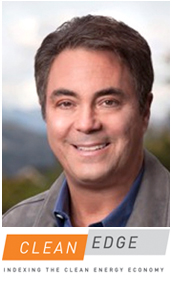 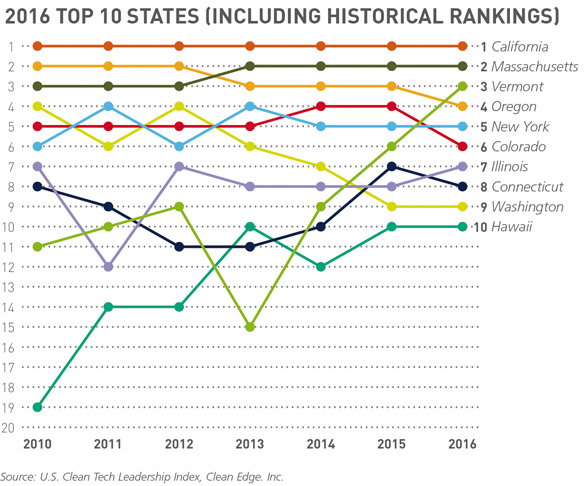