May 16, 2013 7:30 AM ET
Tweet This:
A Canadian classroom gets a special #Skype visit from @jeffbadby for a reading of "Madeline's Rescue" - http://wp.me/p2q6gy-dJX
Blog
Skype Blogs- Social Good

Gillian Madeley is Teacher-Librarian, Literacy@School, Technology & Lead Teacher within the York Region District School Board (Ontario, Canada). She is an avid Skype Classroom user and promoter, and has recently joined the ranks of Apple’s Distinguished Educators, Class of 2013. Follow her on Twitter at @aljasngenietoo. Republished with permission.

This week’s “Faraway Friday” was a very special one thanks in part to our magical guest, and the wonderful people at Skype Classroom. Mme Leslie’s 3rd grade class was able to connect with American advertising executive Mr. Jeff Goodby from Goodby-Silverstein. He connected with us all the way from San Francisco, California! Why you might ask… none other than to share his love of reading by actually reading one of his ultimate favorite books aloud to our students: Madeline’s Rescue (written by Ludwig Bemelmans).

Mazo’s initial reaction to Mr. Goodby was one of shock as he started speaking to us in French! They were thrilled and amazed, and had so many questions… nevertheless, the questions would have to wait as everyone was eager to start the read-aloud. The students were quick to notice that Mr. Goodby’s text was quite tattered, and well used, but understood why when he explained that he used to read it to his three children (now in their 20s and 30s). They were also overjoyed when they learned that the text took place in Paris, France. Some students made connections, while others admired the beautiful illustrations depicting the incredibly rich French history.

During the actual read-aloud, Mme Leslie’s students were able to follow along thanks to Skype’s generous donation of two copies of the text! These will be added to the Mazo library collection in the hopes of sharing the story with many other friends and families!

The students were absolutely enthralled with Mr. Goodby’s choice of text. It was wonderful to see such a strong male role model sharing his love of reading. Throughout the many pauses, students were asked of their opinions, were invited to predict upcoming content, and listened as Mr. Goodby made several connections to the text (speaking of previous trips to France, and his love of reading).

The read-aloud complete, Mme Leslie’s crew was invited to ask questions. Mr. Goodby graciously responded to each and every one. The students learned that he enjoys tennis, loves the Boston Bruins, and has a cat and a dog. They were also fascinated by the fact that through his job, Mr. Goodby has met and/or worked with some pretty incredible people like Wayne Gretzky and Britney Spears (who is apparently quite petite in real life).

They left the library abuzz, and were looking forward to sharing their experience with friends and family over the weekend.

Mazo is very thankful for such an opportunity, and Mr. Goodby has offered to reconnect with us again – it is tough to say who enjoyed themselves more! 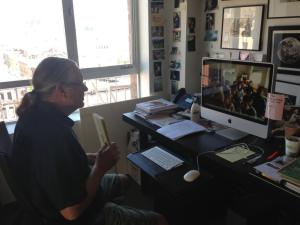 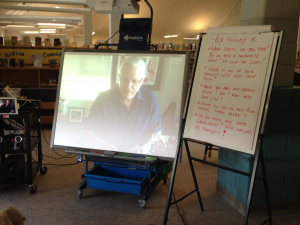 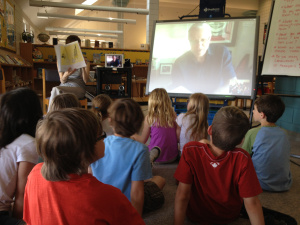 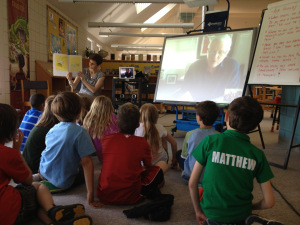