Bloomberg LP is celebrating Pride Month in its offices around the world, building on decades of the company’s support for its LGBT employees and the community at large. Throughout the month, Bloomberg’s LGBT & Ally Community (BProud) is hosting and participating in multiple events around the globe.

This weekend, in celebration of World Pride in New York City, Bloomberg’s employees will be volunteering at #AscendWithPride, where the monumental staircase in FDR Four Freedoms State Park on the southern tip of Roosevelt Island is being transformed into NYC’s largest LGBTQ+ Pride Flag, sponsored by Bloomberg, to celebrate the universal human rights articulated in President Roosevelt’s Four Freedoms Speech.

As part of the WorldPride celebration in New York later this month, members of BProud and other Bloomberg employees plan to walk alongside our friends from the Tyler Clementi Foundation and clients from the Open Finance network in the NYC Pride March in New York City on Sunday, June 30.

Earlier this week in New York, the BProud community hosted an evening of live storytelling fostering cross-generational dialogue to preserve LGBT+ history. In partnership with The Generations Project, attendees heard first-hand from some of the diverse voices that lived, loved and led the LBGTQ Liberation movement. Their previously untold stories remind us where LGBT+ Pride comes from and how far the community still has to go.

Bloomberg also hosted a special Pride Blood Drive this week in honor of World Blood Donor Day. With the New York Blood Center experiencing a blood shortage emergency, Bloomberg’s BProud community stepped in to help replenish the blood reserves and bring awareness to current FDA rules that prevent many in the LGBTQ+ community from giving blood. Eligible friends, colleagues and, in some cases, family members joined to donate as an ally on behalf of those who are currently unable to give. 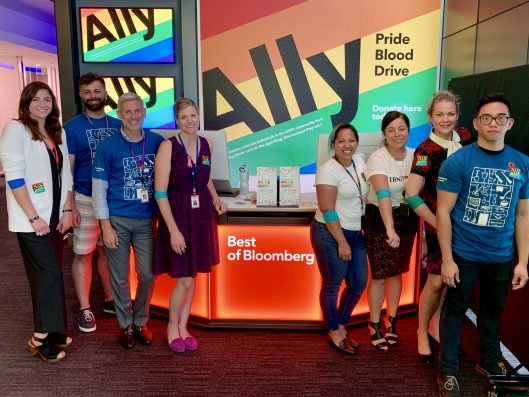 In London, Bloomberg will host the second annual Trans*Code Hackday on Friday, June 14th, as part of the PyLondinium 2019 conference. Trans*Code is the UK’s only hack event series focused solely on drawing attention to transgender issues and opportunities. It is open to trans and non-binary folks and allies.

Bloomberg employees will also be participating in the Interbank LGBT+ Pre-Pride Networking Evening in London on Thursday, June 20 and marching in the Pride in London parade on Saturday, July 6th.

Click here to read more about Bloomberg’s ongoing support for LGBT employees and the community at large.