Clients in Conversation: A Three-Decade Relationship

Jan 7, 2015 8:05 AM ET
Tweet This:
Check out this interview with 2 clients who have been with @RSFSocFinance for nearly 3 decades! http://bit.ly/1yxC6iO
Blog
Reimagine Money Blog

As part of our 30th anniversary celebration in 2014, we interviewed with two clients who have had a long-term relationship with RSF. George Riley and Annalee Dickson Riley invested in our Social Enterprise Lending Program in the early years. George has worked for more than two decades as Development Director for both smaller and larger nonprofit organizations, and previously served as the Treasurer of Camphill Village Kimberton Hills. Camphill is an international movement of intentional communities designed to meet the needs of children, youth, and adults with developmental disabilities. Annalee is a trained Waldorf teacher. Mark Herrera, RSF’s Senior Manager of Client Development, spoke to them about their experience working with RSF for nearly three decades.

Mark: You invested with RSF in 1987. Can you recall how you made the decision to join us as an investor?

George: Well, I’d been involved with Camphill, not only on the board of Camphill Kimberton Hills, but also on the board of the Camphill Foundation. I believe that we had some conversations with what was then [known as] the Rudolf Steiner Foundation. So, I was quite familiar with RSF and what it was trying to do. It was the natural thing to do, to invest it there.

Mark: What was the source of the funds?

George: My wife and I had come into Camphill with a modest amount of funds, which we had put into a savings account and never really used. When I left Camphill, I had to take the money out and invest it either in another bank or somewhere else. And at that point, the logical thing to do was to invest in RSF, and not just transfer it to another bank.

Mark: Do you have an overall approach to how you use your savings and investing?

Annalee: I had some personal funds at that point also, and had decided to put them in RSF, to let them be used by a Waldorf school that was expanding. I had been a class teacher at the Housatonic Valley Waldorf School in Connecticut. After I left that school, we then used some of the money at RSF to loan to the Housatonic Valley School.

Mark: Do you have overarching goals for your investment account with us?

George: In the early years of RSF, almost all of the lending was done for Waldorf Schools. And we were quite happy to support that. In terms of our overall goals, one of the things that was a turning point for me was that I was involved with the Board of The Christian Community in North America. I was on the asset management committee. At that time we were looking at trying to align our investments more with our values. I became convinced that what we were trying to do with our money in The Christian Community was to minimize the amount of harm we were doing. That didn’t make sense to me when it seemed that there was an alternative – where we could do active good. And so, I began to work with that Board to try to get more of our funds out of equities, out of the stock market, and into RSF.

In the course of the conversation with RSF about alternative investments, I learned it was possible to take one’s IRA and, through a third-party organization, invest that in RSF. I had always assumed that that had to be just simply stashed in the stock market, like it or not. It certainly made a big difference to me because I was able to take what to me was a significant amount of money out of the stock market and put it into RSF. And I was very happy about that.

Mark: Can you both reflect on the changes that you’ve helped make possible at RSF over the last 27 years?

Annalee: Well, I certainly have been impressed with your work where women are trying to get businesses started. I’m just very impressed with that initiative. To me, it falls under that sustainable community where individuals within a small area are able to produce goods that can serve the community as well as the society at large.

George: I always followed with tremendous interest in what was happening in terms of new borrowers in agriculture; seeing what can be done to foster alternative approaches, both in agriculture and in food processing and retailing. And I think the whole area of investing in for-profits is also being very judiciously done, with an eye toward really looking at the social benefit of each enterprise.

Mark: Has your perspective about finance or investing changed over the course of your working with us?

Annalee: I’ve just seen RSF as being so innovative in looking for ways in which they could help small companies grow. Whenever I hear someone who’s trying to get something off the ground, I just think of you immediately.

George: I think as time goes on my original conviction that the current economic system is just simply not sustainable has become increasingly more evident. I’m just really pleased that we can put our money in a direction that’s actually doing something good in society, that’s actually transforming and is also creating an alternative economy. I’m really delighted that RSF is a very important part in that.

Annalee: I’m just so happy that we’re part of RSF and the work that you’re doing.

George: I feel blessed – I think we both do – that we can find an outlet for our values that expresses them in such a wonderful way.

George Riley is a professional fundraiser currently working for the Louis D. Brown Peace Institute in Boston.  He lived in Camphill communities in Ireland and the USA for 17 years, and has been active in speech and drama, biodynamic agriculture, the Christian Community and as father to three children and five foster children.

Annalee Dickson-Riley is a trained Waldorf teacher with remedial training in The Extra Lesson.  She built a remedial program at the Kimberton Waldorf School which she carried for 7 years before taking the Curative Education seminar at Beaver Run Camphill Community and the Social Renewal course in England.  She and George joined a life-sharing initiative in the Berkshires, and she took a class through 8 years at the Housatonic Valley Waldorf School in CT.  She is currently teaching in a public school.  George and Annalee live near Great Barrington, Mass. 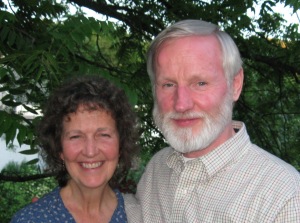